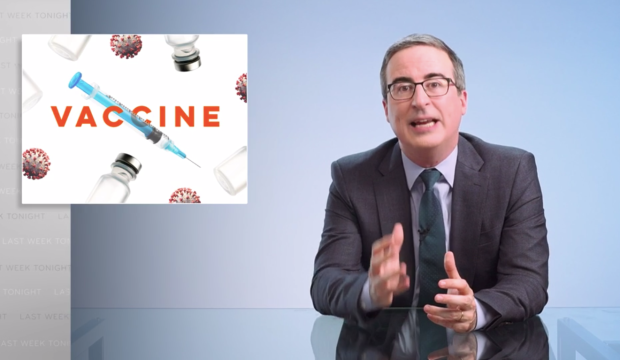 John Oliver devoted all of Sunday’s “Last Week Tonight” to addressing coronavirus vaccine refusal among Americans. The virus isn’t going to go away until a majority of people get vaccinated – the herd immunity threshold is thought to be somewhere between 70 and 90 percent of the population – but America isn’t there, because a large number of people are unwilling to get vaccinated. The country has more than enough vaccines to go around – literally. In recent weeks, vaccine supply has outstripped demand. This is a problem.

“We need to get the vaccine into as many adults as possible as soon as possible,” Oliver said. “That means you really need to get vaccinated. And obviously, I mean the collective you, but also you, Mike in Baltimore,” addressing his rant to an imaginary specific viewer.

“If you’re thinking, ‘Yeah, I’m not sure I’ll need it. Joe Rogan says I’m probably fine.’ It is true: You might not get seriously sick from COVID – or indeed sick at all – but you could still inadvertently pass it to someone who could then die,” said Oliver. “And before you say, ‘Well, vulnerable people should just get vaccinated then,’ the vaccines are only 95 percent effective… so they’ll probably be OK, but maybe not. Also, the more the virus circulates, the likelier we’ll see mutations that make it more dangerous, possibly helping it to evade the vaccine completely, putting us all the way back to square one, so get the f—ing vaccine!”

Around 30 percent of Republicans say they won’t get it, a hesitancy encouraged by influential people like Fox News host Tucker Carlson, who said on his show, “If vaccines work, why are vaccinated people banned from living normal lives?… So maybe it doesn’t work, and they’re simply not telling you that?”

“It is genuinely weird to see someone hosting a show on a supposed news network and ending every sentence with a question mark, especially when answers to most of those questions are out there for anyone who cares to know,” Oliver said. “So for instance, that last complaint, that the CDC still recommends wearing masks indoors around vulnerable, unvaccinated people does not mean the vaccine doesn’t work. Clinical trials found that the vaccines are spectacularly successful at preventing people from getting serious disease. As for whether they protect you from spreading the virus, the trials weren’t designed to assess that, but evidence has so far indicated that they drastically reduce transmission. The reason we still see mask and distancing recommendations is that the CDC is being cautious and wants to be sure that it is not spreading bulls— around during a global pandemic like a frozen dinner duke with a TV show.” (Carlson’s family has a previous connection with Swanson foods.)

“The problem is, when people like Tucker raise questions without bothering to answer them, there is a lot of misinformation out there for people to then stumble on,” Oliver said. “Anti-vaccine groups have been waiting for a moment like this to spread doubt.” People don’t know what to believe, and the misinformation they get makes them even more certain the truth is unknowable. So Oliver devoted the rest of the episode to debunking some of the myths around the vaccine, including the Bill Gates microchip conspiracy theory, the belief that the development of the vaccine happened too quickly for it to be safe (not true, because coronavirus vaccines have been in development for years, and they were able to be released to the public quickly because scientists did several things that would typically be done sequentially at the same time instead), and the fear that it affects pregnancy (the only woman during clinical trials who suffered a pregnancy loss was given a placebo).

In the end, Oliver said, “No side effect of the vaccine is worse than the alternative – COVID.”