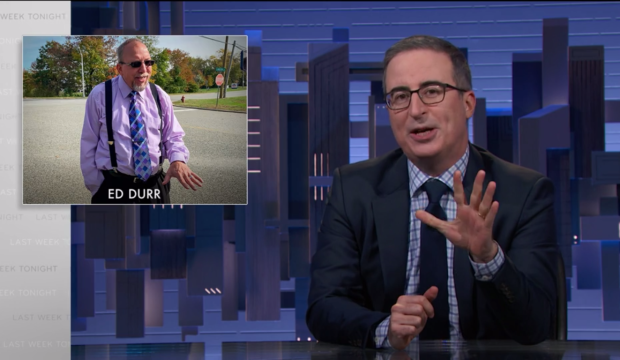 On Sunday’s “Last Week Tonight,” John Oliver offered up a postmortem on Democrats getting shown up during elections last week. They lost the governor’s race in Virginia and nearly lost the race in New Jersey, with incumbent Phil Murphy squeaking out a victory over challenger Jack Ciattarelli. But Oliver said that the clearest sign that voters are unhappy with Democrats is the story of Ed Durr, a truck driver with no political experience who upset one of the state’s most powerful Democrats in the New Jersey State Senate.

Oliver joked that there was a lot to process about that race, but one thing that he digested very easily is that Ed Durr’s name is Ed Durr. “Because when you look like this, the ‘Ed Durr’ is very much assumed,” Oliver said, as a photo of Durr dressed like he was wearing a Halloween costume of Paul Giamatti’s character on “Billions” that he put together in two minutes appeared on the screen. “I see this image and I immediately know three things: He’s a white middle-aged guy, his style icon is Larry King, and his name is unavoidably ‘Ed Durr,’” Oliver said.

“Now this was a huge upset,” Oliver continued. “And if you’re thinking, well, maybe Ed Durr simply captivated people with his unique and powerful vision of New Jersey, good luck landing that argument.”

He then rolled a clip of Durr on Fox News saying he didn’t know what he was going to do when he assumed office because he didn’t really know anything about anything.

“Oh, come on, Ed Durr! You could have answered anything there!” exclaimed Oliver. “You could have said, ‘I’m going to lick every door handle’ or ‘I’m doing to get to the bottom of this Epstein thing,’ or you could have just said ‘Durr’—any of which would have been better than, ‘I don’t know.’”

You may not be shocked to hear that Durr has also compared COVID-related mandates to the Holocaust and called Islam a “false religion” and the prophet Muhammad a “pedophile.”