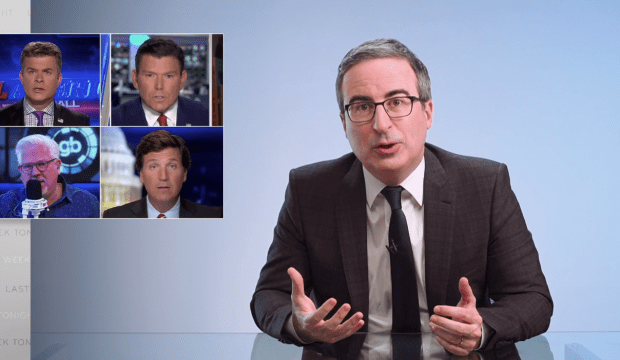 Amidst an opening segment on Sunday’s “Last Week Tonight” that touched on Texas Governor Greg Abbott lifting the state’s mask mandate and the Milwaukee Bucks basketball team welcoming fans back to the arena with a distressingly phallic animated hand sanitizer bottle, John Oliver devoted some time to respond to conservative media’s predictably histrionic coverage of the Dr. Seuss publication controversy.

Oliver observed that while most news networks devoted significant airtime to FBI director Christopher Wray’s testimony before Congress about what right-wing insurrectionists were behind the Capitol riot, Fox News and its ilk did not. Instead, the conservative network was more interested in Dr. Seuss. The trust that controls the children’s author’s estate has decided to cease publication of six books that contain racially insensitive imagery, which conservative media figure Glenn Beck called “fascism.” Many other conservatives were calling the decision book-banning, which Oliver pointed out is inaccurate.

“The books weren’t banned,” Oliver said. “Dr. Seuss Enterprises decided to stop printing six of them. And a company deciding which of its own books it will or won’t print is an example of free enterprise, not fascism.” To say books are “banned” implies government censorship, which is not the case here.

He said that for the most part, Fox News didn’t actually even show the images they were supposedly defending. Instead, Fox News’ Tucker Carlson focused on “The Sneetches,” a book that is not in question, “so he can play his favorite game, ‘liberals are the real racists.’”

On his show, Carlson argued that people were trying to cancel Dr. Seuss because they’re trying to get rid of a kind of “mid-century American culture, a culture that championed meritocracy and colorblindness.”

This is a stupid argument, Oliver pointed out. “It’s a little weird to claim that mid-century American culture championed color-blindness when signs of the time explicitly demanded the opposite,” he said, flashing an image of segregated water fountains on the screen.

“In fact, to the extent anyone is trying to eliminate some parts of American culture, it’s the parts that perpetuate racism, xenophobia, and bigotry,” Oliver said. “But it’s not hard to see why Tucker would be so anxious to talk about Dr. Seuss this week, because if he talked about Christopher Wray’s testimony, about white supremacists participating in the attack on the Capitol, it would’ve contradicted what he has been telling his viewers for weeks now like: ‘There’s no evidence that white supremacists were responsible for what happened on January 6th…that’s a lie.’”

He continued, “So instead, conservative media fell back on their classic playbook of distracting from important issues with bullsh– culture wars. It’s incredibly lazy and depressingly effective. And the thing is, no matter how many times I see them do it, it never fails to leave me feeling completely disgusted and like there’s no way for me to get clean.”