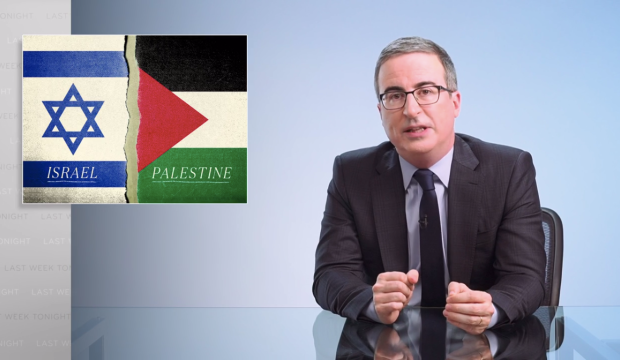 John Oliver opened Sunday’s “Last Week Tonight” by talking about the current conflict between Israel and Palestine that CBS described as a “tit-for-tat war” where “over 80 Palestinians and seven Israelis have been killed” since Monday. (That number is now up to 197 Palestinians and 11 Israelis, according to the New York Times.)

Oliver said that American media is not adequately covering the conflict, which is not a “tit-for-tat war:” “You just pointed out one side has suffered over 10 times the casualties, something that speaks to both the severe power imbalance at play here, and how that often gets obscured by how we choose to talk about it.”

Oliver said he wasn’t going to try to explain the history of the conflict or propose a solution, but what’s happening this week isn’t actually morally complicated if you accurately assess the facts. For example, media characterization of the removal of Palestinians from their homes as “evictions” is misleading, because it doesn’t convey how the eviction campaign is violent and militarized.

“It’s like running a headline that says ‘Matt Gaetz Reaches Out To Florida Youth,’” Oliver said. “Sure, not inaccurate, but it’s missing some pretty crucial details about the exact nature of that interaction.”

And it is true that Palestinian militants fired over 1,000 rockets at Israel in the past week, which Oliver called “reprehensible.”

“But – and I realize this is the most load-bearing conjunction in history – but the majority of those rockets thankfully didn’t reach their targets for a very clear reason,” Oliver said. And that reason is Israel’s vastly superior military that includes a network of interceptor rockets called the “Iron Dome.” The imbalance in military power leads to much higher casualties on the Palestinian side, Oliver said, as Israeli rockets hit civilian targets and kill children. Israel defended such strikes as militarily justified and carried out as humanely as possible, partially because of pre-warning messages.

“For the record, destroying a civilian residence sure seems like a war crime. Regardless of whether you send a courtesy heads-up text,” Oliver said.

Oliver said that international and Israeli human rights organizations have categorized the Israeli government’s treatment of Palestinian territories as “a form of apartheid,” and the U.S. government supports it. The Biden administration’s response to the crisis has been “deeply underwhelming,” Oliver said, with the president trotting out the old cliche of “Israel has a right to defend itself.”

“It’s not that Israel doesn’t have the right to defend itself,” Oliver said. “It’s just, that line cannot be used to excuse absolutely everything. Multiple children have been killed this week and the U.S. is heavily implicated here … by constantly refusing to criticize the indefensible,” Oliver said.

“There is a real tendency, particularly in America, to ‘both-sides’ this situation –  and I’m not saying that there aren’t some areas where that’s warranted – but it’s important to recognize there are also areas where it’s simply not,” Oliver added. “Both sides are firing rockets, but one side has one of the most advanced militaries in the world. Both sides are suffering heartbreaking casualties, but one side is suffering them exponentially.” And America “has blood on its hands, too,” he said, and should really take a long, hard look at its unwavering support for Israel.