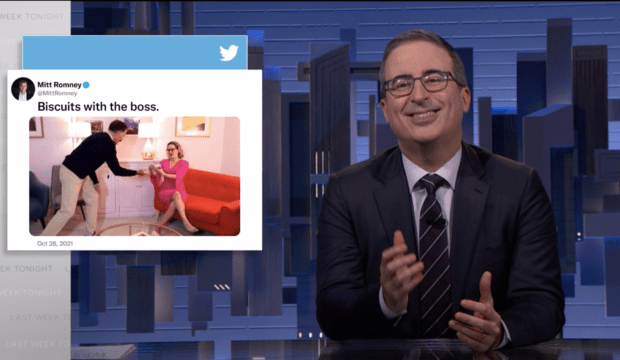 Halloween always provides a great opportunity for famous people to embarrass themselves. This time, the guy who thought he was doing something cool and got himself dunked on was Senator Mitt Romney, who dressed up as Jason Sudeikis’ popular character Ted Lasso, with the sitcom coach’s signature mustache, whistle, and blue sweater.

John Oliver was not a fan. On “Last Week Tonight,” the host pointed out the fact that in his Twitter post showing off his costume, Romney quoted “Clear eyes, full hearts, can’t lose,” which is from a different show about a football coach, “Friday Night Lights.” There is no apparent reason why Romney conflated the two.

Even worse was Romney’s gif of himself giving a plate of baked goods to Senator Kyrsten Sinema, the Democrat from Arizona who is holding her party hostage by refusing to vote on President Biden’s infrastructure bill, with the caption “Biscuits with the boss.” He also posted a photo with the caption “She’s one tough cookie.” Oliver called Romney and Sinema’s move “very ‘homeroom teachers dressed as the most popular kids in school.’ You think you’re in on it, but you’re very much not.”

Oliver wasn’t the only late-night host to get some jokes in at Romney and Sinema’s expense; on Thursday’s “Late Night,” Seth Meyers cracked “You know you are unpopular when you can single-handedly ruin one of America’s favorite TV shows.”

The main story on “Last Week Tonight” was about homelessness and can be watched on YouTube. The full episode is available to stream on HBO Max.