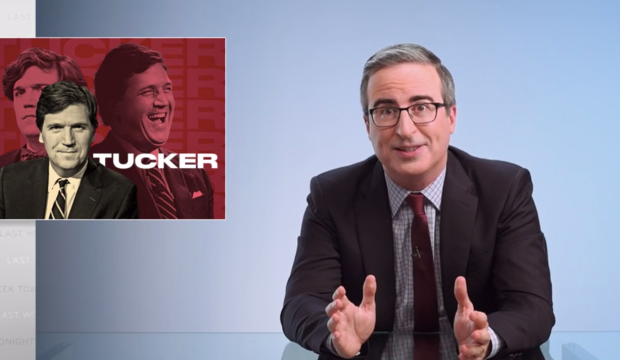 John Oliver absolutely tore into Tucker Carlson on Sunday’s “Last Week Tonight,” slamming the Fox News host for his divisive rhetoric. Oliver methodically laid out how the perpetually aggrieved Carlson has become what he called “the most prominent vessel in America for white supremacist talking points,” spreading dangerous ideas to millions of frightened Americans. It was, essentially, YouTube drama, and Oliver had the receipts, tracking Carlson’s rise from Swanson frozen food heir to the bowtied face of the conservative media.

Carlson is always in the news for some controversial thing he said on his show – this week it’s a bizarre rant about women in the military – and that was reason enough for Oliver to go after him. Oliver showed how Carlson is always saying he doesn’t even understand what “white supremacy” is, so Oliver explained it for him, using Carlson’s own words.

“He is scared of a country that ‘looks nothing like the one he grew up in’ because diversity ‘isn’t our strength,’ immigrants make our country ‘poorer, dirtier, and more divided,’ and any attempt to change that culture is an attack on Western civilization,” Oliver said. “All of which is really just a long way of saying that when Tucker asks, ‘What is white supremacy?’ the answer is: basically that. It’s a belief that in a country where white people are dominant, that’s all down to their natural and innate abilities, and any effort to change that is an affront to the natural order of things.”

That’s Oliver’s conclusion about Carlson, but the whole segment is worth watching if you have a half-hour to get even more worked up about the news than usual.