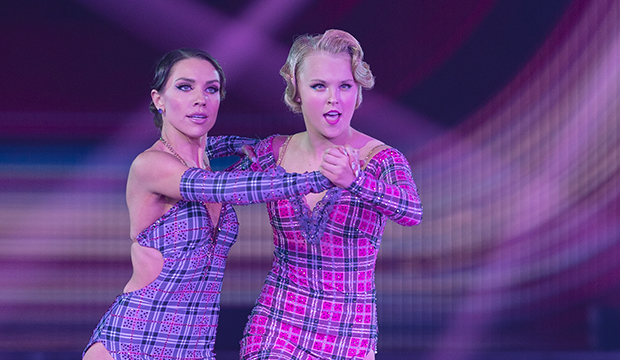 “Dancing with the Stars'” two-night Disney Night next week means double the dances, double the songs and maybe a Disney flick some contestants haven’t even seen yet. Such is the case for JoJo Siwa and Jenna Johnson.

For the two-night event, the couple is performing a Viennese waltz inspired by “Cinderella” for Monday’s Heroes Night — that one they have seen, because who hasn’t? — and a paso doble on Tuesday’s Villains Night inspired by the offspring of some iconic Disney villains.

“We’re gonna be Descendants, which we need to make it a point to watch the movie because neither of us have seen it,” Siwa told “Access Hollywood.” “However, I convinced Jenna on ‘Descendants’ because I like the music.”

“Yeah, so she’s very excited about the song. We’re not going to reveal that, but we’re doing a paso doble,” Johnson teased.

SEE Watch every Britney Night performance on ‘Dancing with the Stars’

Unclear if they will watch the entire “Descendants” trilogy, but it sounds like it’ll be just the OG Disney Channel flick, the soundtrack for which hit No. 1 on Billboard (so, “Rotten to the Core,” perhaps?).

Siwa and Johnson will look to continue their hot streak at the top of the leaderboard for the fourth straight week with the double routines. They topped the first week with a 29, their Week 1 and Week 2 scores combined for a co-leading score of 60, and they were in a three-way tie for first on Monday’s Britney Night with a 24 alongside Amanda Kloots and Alan Bersten, and Olivia Jade and Val Chmerkovskiy.

“I thought we did phenomenal. Literally when I ended, I was like, ‘We did it, we did it, we actually did it, we nailed it, we did it, we got through it,'” Siwa said of their Argentine tango to “…Baby One More Time.” “It just feels so good to work so hard in rehearsals and have it pay off. And being at the top obviously is great. Everybody wants to be at the top. We’ve been at the top for three weeks, which is crazy and amazing and shared with other people, especially Amanda and Alan, who are sweethearts, and Olivia and Val, who [Johnson is] literally married to, so it’s nice.”

“Dancing with the Stars” will air next week on Monday and Tuesday at 8/7c on ABC.