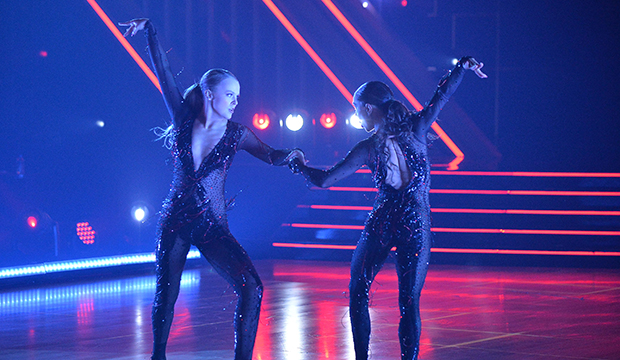 JoJo Siwa and Jenna Johnson had a near perfect routine with their salsa to “Feedback” on “Dancing with the Stars'” Janet Jackson Night, but what you didn’t see was that the pop star sustained an injury in the middle of the dance. Yes, in the middle.

“Doing that dance, I was just living in the moment. Then all of the sudden, we got like halfway through and I got the worst feeling in my neck,” Siwa explained to “Entertainment Tonight.” “I cracked, popped, snapped something. Couldn’t feel anything from my hip to my head.”

But Siwa was not going to let the mid-routine mishap derail the performance, which featured her picking up Johnson for an eye-popping lift. “I was like, ‘That is not ruining this moment,'” she continued. “I couldn’t see. I literally couldn’t do anything until I up got to pick [Johnson] up at the next lift. I was like, ‘Get it together. You’re almost [there]. Four eights. Pull it off.'”

The pair earned a 39 for their effort and Siwa recovered to perform their rumba in the dance-off opposite Johnson’s husband Val Chmerkovskiy and his partner Olivia Jade. Siwa and Johnson won the dance-off, adding two bonus points to their total. “We had the best night. We killed our dance, nailed all our lifts, hit all our tricks, killed it,” Siwa recounted. “Then we came out and did rumba. Killed it. Got the two bonus points, murdered our night.”

But it was a bittersweet night in the end as Jade and Chmerkovskiy were eliminated along with Jimmie Allen and Emma Slater. “It sucks,” Johnson said. “I am devastated for [Chmerkovskiy and Jade] because I know the hard work they’ve put into this season. I honestly thought they were going straight to the finals, so I’m a little bit confused. I know how much Val loved this season. This was the first time he got to dance in a while, and I think Olivia was the perfect partner for him. … The four of us had this team gang thing together and I’m just sad. It just sucks. It’s the worst.”