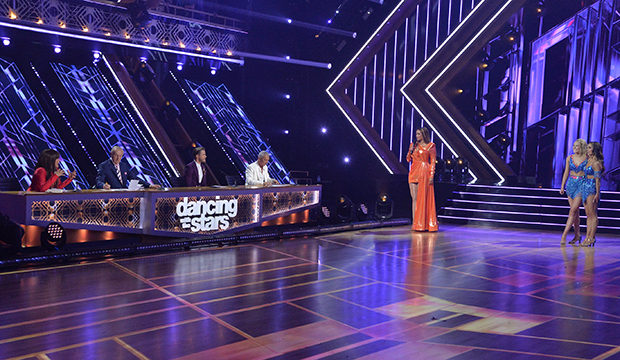 “Dancing with the Stars” has a (limited) studio audience again for Season 30, and if there’s one thing you can count on the fans for, it is the unnecessary booing of constructive, fair critiques from the judges that are actually helpful for the celebrity.

After JoJo Siwa and Jenna Johnson‘s peppy cha-cha on Monday, Derek Hough advised her to learn to harness her energy in her routines. “I think with you, more is more, right? But sometimes, especially on the side by side, more isn’t more. You’ve got to contain that energy a little bit. It can get a little bit wild and lose the quality of movement. And I know that because you’re a dancer –” he said before he crowd started booing, cutting him off. Bruno Tonioli agreed with Hough — and so do Siwa and Johnson.

The “Dance Moms” alum then shared an exchange that happened between her and Hough during the commercial break before the elimination. “Derek looked at me and was like [signaling]. He had like a moment and he was basically saying like, ‘I don’t want you to think that what I said means you did bad,'” Siwa revealed. “Because he knows that that’s how my brain will automatically work, and it was genuine, like, ‘You did good.'”

Johnson added that Hough — who gave them a 7, contributing to their score of 31 for the week, the second highest of the night — is “right in a sense,” to which Siwa said, “Of course.” “We do work on that in all of our rehearsals — controlling that energy or just putting it into intentional places,” Johnson stated. “So I’m excited for next week because I feel like we can really take those critiques and work on them.”

For Britney Week, the pair will dance to Britney Spears‘ iconic debut single “Baby One More Time.” “Britney is a legend,” Siwa gushed. “I actually was lucky enough to see her perform in Vegas and after watching that show, I was just like, ‘That is a performer.’ That is a genuine, true performer, and that is something that I love and I think is so respectable about her.”

RSVP here to watch the debuts of our upcoming Q&As with top Oscars and TV Award contenders here. Or watch some of the great video discussions already posted for you to view.

FILM SHORTS ON THE OSCAR SHORT LISTS: TODAY Jan. 20 at 4 p.m. PT — RSVP to see the debut of our interviews with the creators of “Coded” (Ryan White), “Lynching Postcards” (Christine Turner), “The Musician” (Reza Riahi), “Robin, Robin” (Mikey Please) and “Sophie and the Baron” (Alexandria Jackson).

FILM DOCUMENTARY OSCAR FINANLISTS (PART 2): TODAY Jan. 20 at 6 p.m. PT – RSVP to the debut of our revealing riffs with the creators of documentaries that made it onto the Oscar shortlist of potential nominees.
“Summer of Soul” (Questlove), “Ascension” (Jessica Kingdon), “Flee” (Jonas Poher Rasmussen), “The First Wave” (Matthew Heineman), “In the Same Breath” (Nanfu Wang), “The Velvet Underground” (Julie Goldman).

RSVP NOW to our “Meet the Experts” Oscar chats with contenders for best sound, music scores and songs, documentaries, shorts and more. Each event includes solo Q&As followed by a lively roundtable discussion.