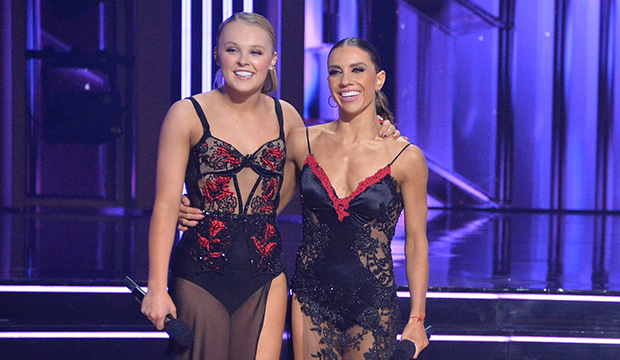 JoJo Siwa and Jenna Johnson turned up the heat on Monday’s “Dancing with the Stars” with their rumba in the dance-off, causing Carrie Ann Inaba to exclaim that their “passion and chemistry was palpable.” But the pro admits she wasn’t always looking forward to performing the sultry dance this season.

“I told JoJo, Week 1, the only dance I didn’t want to do this season was rumba,” Johnson told Yahoo Entertainment. “I didn’t want to do it because it is a dance of love, and it is a very sensual dance that requires a lot of chemistry, and it works really well for a male and a female. And I just didn’t know if I would be able to commit to a rumba or if I would be able to pull it off, honestly, with another female.”

The pair, the show’s first same-sex couple in history, ultimately knew they had to be all in on the routine. “I just told JoJo, like, ‘We’ve gotta go there and we’ve gotta sell it,'” Johnson shared. “Because if we look uncomfortable doing it, the audience is going to feel uncomfortable watching it.”

Siwa and Johnson faced off against Johnson’s husband Val Chmerkovskiy and his partner Olivia Jade in the dance-off to “That’s the Way Love Goes” for Janet Jackson Night. Inaba, who was assigned their dance-off, awarded Siwa and Johnson the two bonus points, bringing their total for the week to 41.

After landing in the bottom two last week, Siwa and Johnson safely made it into the semifinals (unfortunately for Johnson, her hubby and Jade were eliminated along with Jimmie Allen and Emma Slater), and Johnson has big plans for next week. “We are going to go a more emotional route, which I don’t think people have seen from JoJo yet,” she teased. “I feel like we’ve seen many different shades of her, but we haven’t seen this sort of shade. So I’m excited to kind of tap into that and I’m just really excited for what we have planned.”