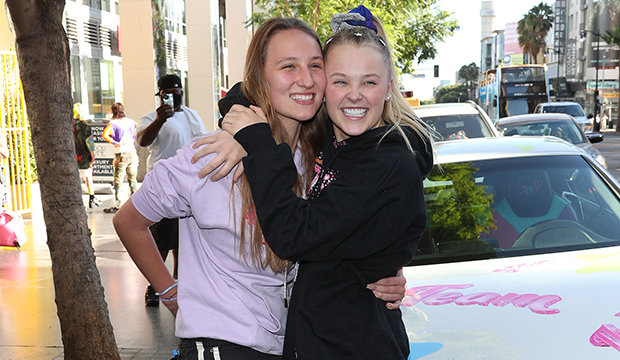 “Dancing with the Stars” frontrunner JoJo Siwa and her girlfriend Kylie Prew have split up after less than one year together, Us Weekly reports.

The split happened about two weeks ago and “some [‘Dancing with the Stars’] cast are aware about the breakup,” a source told the magazine. Prew has stopped attending the weekly tapings as well. “JoJo is focusing on the competition and giving her all. While it’s a rough time for her, she’s handling [the show] very professionally and still putting on a smile and giving 100 percent,” the source added. “She doesn’t want to let down her fans.”

The news comes a week after Siwa sparked breakup rumors when she shared that she was dealing with something “very, very extreme” in her personal life as she was rehearsing for Disney Week. She did not specify what the issue was, but credited her friends, family and partner Jenna Johnson for helping her get through it.

SEE JoJo Siwa was dealing with a ‘very, very extreme’ personal issue during ‘Dancing with the Stars” Disney Week

“[It’s] something that I had never gone through and something that I’ve never felt before,” the 18-year-old said at the time. “I’m really lucky that every day this week, I got to spend three hours with my best friend in rehearsals. At the end of rehearsal, she would go, ‘OK, we got there. You OK? Cool.’ … It definitely has been a week, but because of my family, because of this song, because of the show, I’m on the other side of it.”

Siwa and Prew started dating in January and went public the following month. Before the season began, Siwa accidentally revealed Johnson was her partner by sharing an anecdote of Prew joking that she was getting too close to Johnson. The Season 26 champ has “nothing to do” with the split, according to the source, and has been “like a big sister” to Siwa.