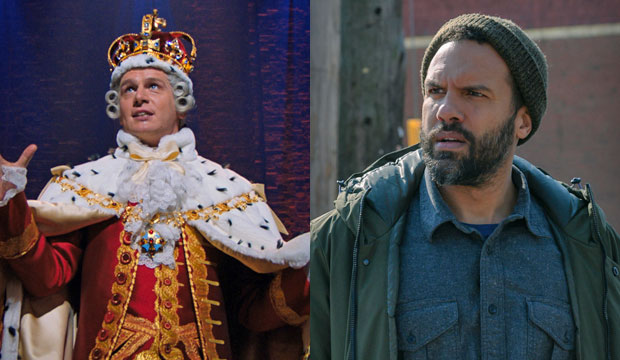 I was (and remain) an unapologetic partisan for HBO’s short-lived series “Looking,” which explored the lives of a group of gay friends living in San Francisco. It ran for two seasons (plus a finale TV movie that wrapped up the show’s storylines), but it was never nominated for an Emmy. However, this year two of its cast members received their first ever noms: Jonathan Groff (“Hamilton”) and O-T Fagbenle (“The Handmaid’s Tale”).

Groff starred in “Looking” as Patrick Murray, a lovelorn video game designer torn between his boss Kevin (Russell Tovey) and working-class Richie (Raul Castillo). Now he’s nominated for Best Movie/Limited Supporting Actor for his role as King George in the Disney+ presentation of the Broadway musical “Hamilton” (he’s nominated against his co-stars Daveed Diggs and Anthony Ramos). The stage version earned him a Tony nomination for Best Featured Actor in a Musical and won him a Grammy as a performer on the cast album. Now he’s been nominated for three-quarters of EGOT for the same role.

SEE2021 Emmy nominations complete list: All the nominees for the 73rd Emmy Awards

Fagbenle recurred in “Looking” as Frank, who was in a long-term relationship with Agustin (Frankie J. Alvarez) until they broke up at the end of season one. He has since mended his broken heart as Elisabeth Moss‘s husband on “The Handmaid’s Tale,” for which he is now nominated for Best Drama Supporting Actor for the first time after four seasons on the show. And he too is nominated alongside a pair of co-stars: Bradley Whitford and Max Minghella. But while this is his first Emmy nom, he has been recognized by his industry peers before: he’s racked up three nominations at the SAG Awards as a member of the “Handmaid’s” ensemble cast.

So while celebrating their nominations for their work this year, I’m just going to go ahead and assume voters were also belatedly catching up on “Looking” on HBO Max before casting their votes.