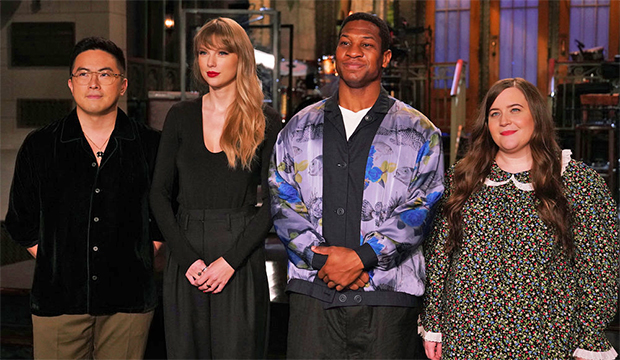 Jonathan Majors hosted the Nov. 13 episode of “Saturday Night Live” with special musical guest Taylor Swift. It was Majors’ first time not only hosting but appearing on the late-night sketch series at all, while Swift is now on her fifth stint as musical guest. Majors is coming off a major year of success in the industry, with a memorable guest stint on the Disney+ series “Loki,” an Emmy nomination for “Lovecraft Country” and a starring role in the new Netflix film “The Harder They Fall.”

For his first “SNL” monologue, Majors spoke about the experience of filming “The Harder They Fall.” While the actor admits it was a fun movie to shoot, it didn’t exactly help his self-esteem to be working alongside one of the most handsome men in Hollywood. “If you ever wanna feel bad about how you look, definitely spend two months standing next to Idris Elba,” he quipped.

Majors also delved into his life growing up as the son of an air force officer and a pastor. He rattled off all the places he’s been, explaining he was “born in California, raised in Texas, educated in North Carolina, roughed up in New York City and then re-educated in New Haven, Connecticut.” Which is also his roundabout way of saying he went to Yale.

Majors talked about how far he’s come; at 17, he was homeless, living in his car while holding down jobs at Red Lobster and Olive Garden. As it turns out, both restaurants are owned by the same parent company, so “you can work at both places with no problem.” He observed that other famous people, like Nicki Minaj and Chris Rock, also got their start at Red Lobster.

Now, here he is, about to star in the next “Ant-Man” movie and hosting “Saturday Night Live.” While it would be easy to be intimidated by this, he recalled advice he received from his grandfather: “Everything’s big at first, but you walk up on it, you face it, pretty soon it’s so small, you can put it in your pocket.” As he noted, this also happens to be the tagline for the new “Ant-Man” movie.