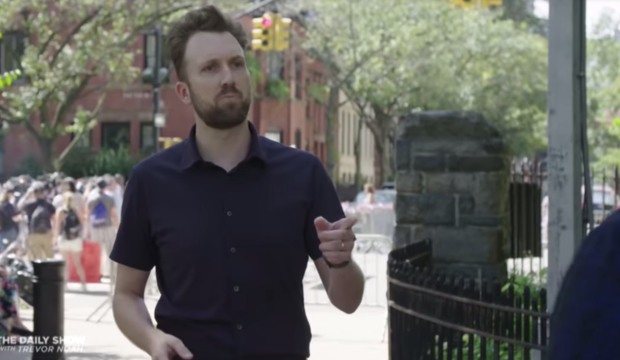 “The Daily Show” correspondent Jordan Klepper hit the streets of New York City for his latest fieldpiece focused on extremism in America. The man-on-the-street interview specialist went to a protest against the city government’s vaccine mandates in front of Mayor Bill de Blasio’s residence last week. He asked attendees some simple questions that revealed the depth of their ignorance.

Starting September 13, the city will start enforcing a requirement that people will need to have gotten at least one dose of the vaccine in order to eat in restaurants, go to the movies, or go to the gym. There are plenty of people in New York City who are vehemently opposed to mandates and also the vaccine, and Klepper talked to many of them — including one woman who said “people are having their DNAs wiped out” as the result of the vaccine.

Edwin De La Cruz, a Republican candidate for city council, said that the vaccine was rushed and the science is unproven.

“We were moving at warp-speed… so Donald Trump rushed it,” Klepper said in response, noting how the vaccine development started while Trump was president.

“Who rushed it?” Klepper asked.

De La Cruz was stumped. “How about we switch places and I start attacking you?” was the best response he could come up with.

One woman claimed vaccine mandates are both fascist and a communist ideal and that being barred from places like gyms because of vaccine status was akin to Nazi concentration camps. After Klepper pointed out that communism and fascism are “diametrically opposed ideologies,” the woman slightly changed her mind.

“I don’t think it’s communism — I think it’s more like a dictatorship like we’re living in a Nazi Germany and the only thing that’s missing is the camps and the gas,” she said, parroting inflammatory language espoused by Republican congresswoman Marjorie Taylor Greene.

Klepper, naturally, didn’t buy it. “That’s what’s happening right now? Because you can’t go to a concert?” he asked her, adding, “Do you think that’s what it was like in Nazi Germany? People were bitching about not going to a gym?”

It’s nothing you haven’t heard before, but it’s still pretty striking to hear the things people believe.

'The Daily Show: Hungary for Democracy' director Ian Berger: 'Thank you to the Hapsburgs for making such…