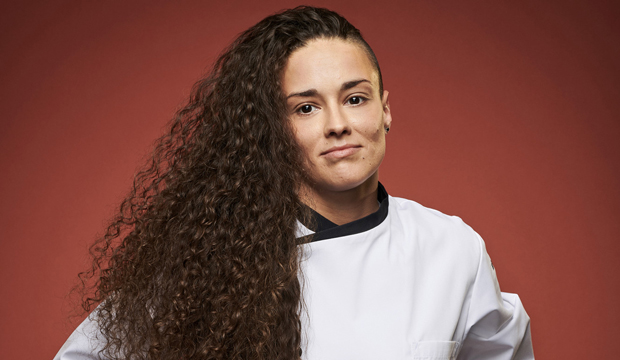 “Leaving here like this sucks,” declared Jordan Savell after being eliminated on the 11th episode of “Hell’s Kitchen” Season 19. Not believing Jordan was the true leader he was looking for, Gordon Ramsay took her jacket after a charity dinner service in which she almost served raw steak. “I just wasn’t ready to go,” said the 29-year-old executive chef from Texas during her tearful exit interview. “I gave it everything I have and I gotta make peace with that. Like Chef said, I’m a soldier. Maybe one day I’ll be a general.”

Chef Ramsay’s choice came down to either Jordan of the Red Team or Amber Lancaster of the Blue Team. At first he did a fake-out and made Amber believe she was going home, then told her instead to get “back in line.” As for why he kicked Jordan to the curb, the host explained, “Jordan, you’re a soldier. Your energy is endless. But I’m not looking for a soldier, young lady. I’m looking for a general. You have come a long way in a short period of time. I hope with this momentum, you don’t stop. Please, give me your jacket.”

This was Jordan’s fifth time on the nomination block, matching the number Marc Quinones hit last week when he was finally cut. After Jordan exited the “Hell’s Kitchen: Las Vegas” set, Gordon told the remaining contestants to improve their games, as the finish line was in sight: “If I were you, I’d be stepping up and looking at ways that I could separate myself from the competition. Get the message?”

Gordon then took Jordan’s jacket upstairs and hung it up on its hook, where her portrait ceremoniously burned. “Jordan soldiered through many battles here in ‘Hell’s Kitchen,'” he declared, “but tonight, she lost the war.”