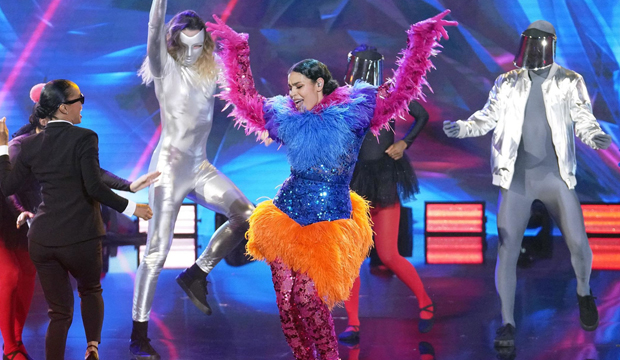 The final five performed on “The Masked Dancer” on Wednesday night’s episode, with the Exotic Bird ultimately losing her head and being revealed as Grammy nominated singer/songwriter Jordin Sparks. The Season 6 winner of “American Idol” couldn’t quite fly across the finish line and panelists Paula Abdul and Ashley Tisdale both guessed it was the songstress shaking her tailfeather to “Opposites Attract.”

“They told me that [Paula] was gonna be on here and I was like, Paula knows me,” Jordin confessed during her unmasked interview with host Craig Robinson. “You know how I am on stage and all of that stuff. And I love you so much! So I was like, she’s gonna know it’s me. I wanna hug you but I know we can’t!”

“It was great,” Jordin replied when asked how it was to be the Exotic Bird. “It was freeing. I could just be anonymous and I love to dance, but doing it on stage like this is something I never thought that I could do. And also I can show my son that it’s okay to do things that scare you sometimes.”

Paula could spot Jordin inside the Exotic Bird costume for a couple of weeks and Ashley was quick to jump on Paula’s bandwagon to earn her first correct guess of the season. Brian Austin Green guessed that the Exotic Bird was model Ashley Graham, Ken Jeong thought she was another “Idol” alum, Jennifer Hudson and guest panelist Mayim Bialik went with rapper/talk show host Eve.

Jordin was the sixth dancer to be unmasked this season, preceded by Ice-T as the Disco Ball, Bill Nye as the Ice Cube, Elizabeth Smart as the Moth, Brian McKnight as the Cricket, and Vinny Guadagnino as the Hammerhead. The four remaining two-steppers still in contention for the Diamond Mask trophy are Cotton Candy, Sloth, Tulip and Zebra. Did you guess Jordin Sparks was dancing behind the Exotic Bird mask?