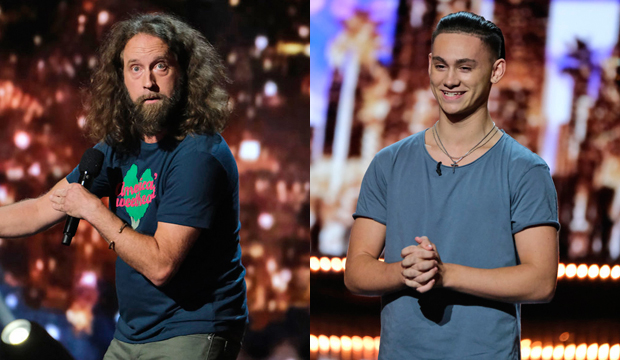 All summer long, “America’s Got Talent” viewers have been making their predictions for who will win Season 16, and things are looking good for Josh Blue. This 42-year-old comedian from Los Angeles, California has found a hilariously “naughty” way, to use Simon Cowell‘s word, to make jokes about his cerebral palsy. If our readers are right that Josh will win the $1 million prize on Wednesday night, he’d be the first stand-up comic ever to claim victory. Josh already knows a thing or two about succeeding on NBC reality TV shows, as he won “Last Comic Standing” in 2006.

Our users have Aidan Bryant in second place to win, the 16-year-old self-taught aerialist from Prince George, Virginia. Simon was so impressed with the talented teen during Tuesday’s finals that he actually jumped up on the desk to give him the tallest standing ovation in “AGT” history. Similarly to Josh’s story, Aidan would be the first-ever acrobatic act to win the competition in 16 years.

Here are the complete “America’s Got Talent” winner predictions for the Season 16 finals:

SEE ‘America’s Got Talent’: 4 ways the Season 16 finale can make history for ‘AGT’

Stand-up comedians have come close to winning over the years, but none have ever taken home the trophy. Tom Cotter in Season 7, Taylor Williamson in Season 8 and Drew Lynch in Season 10 were all runners-up on their respective years. Both Josh Blue and Gina Brillon were voted into the finals based on America’s votes (as opposed to advancing via the instant save or the judges’ save), which suggests they have lots and lots of fans out there. Is Howie Mandel right that this is the “year of the comic”?

The closest an acrobatic act has ever come to winning “America’s Got Talent” was Zurcaroh in Season 13. And Duo Transcend made it into the Top 10 of Season 13 and will next be seen at the “AGT” Las Vegas show at the Luxor Hotel. We’d love to see an eye-popping danger act win one day along the likes of current contenders Aidan Bryant or World Taekwondo, but is this their year?