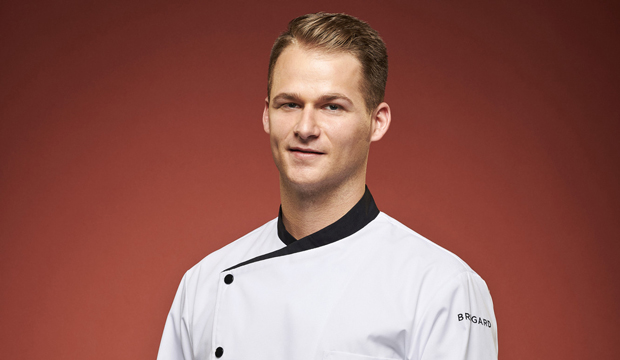 Birthday boy Josh Oakley had nothing to celebrate during the sixth episode of “Hell’s Kitchen,” as he was eliminated in 12th place by host Gordon Ramsay. “I’ve never failed before in my life, so today does hurt,” said the Denver, Colorado native in his exit interview. “I’m disappointed in myself because Chef Ramsay tried to pull something out of me and I just didn’t have it. This sucks ’cause out of all days it is my 29th birthday and I’ll be spending it alone.” Will you miss Josh on “Hell’s Kitchen”? Sound off down in the comments section.

Josh had a rough final dinner service, as he repeatedly failed at the garnish station and didn’t communicate with his teammates. At one point he even served bland mashed potatoes, which he readily admitted he failed to taste beforehand.

“I definitely have the drive and I have the knowledge and the strength to keep pushing forward,” Josh said when he was put up for elimination alongside Amber Lancaster by the Blue Team. “When people lean on me, they can depend on me and I know how to be a leader.”

However, Ramsay wasn’t swayed by his last-minute pitch and he took his jacket. “Tonight, when Josh blows out the candles on his birthday cake, he should wish for one thing: a stronger voice,” Ramsay stated in his closing remarks.

Earlier in the episode, Josh shared in a moment of fun with his fellow Blue Team members at a Las Vegas racetrack. After prevailing in the rock ‘n’ roll Italian challenge, they all experienced the thrill of 200 mile-per-hour racecars as the rival Red Team endured a grueling punishment of preparing the night’s dinner service.