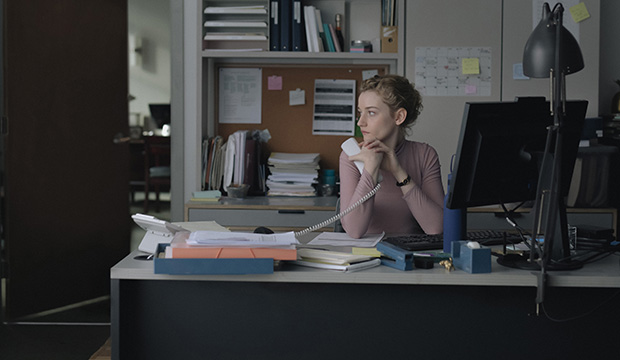 In 2019, Julia Garner became the rare TV supporting actress to earn an individual Screen Actors Guild Award nomination for her performance as the feisty Ruth Langmore in “Ozark.” Since then, she has won two consecutive Emmys for the Netflix drama and just earned her third Critics’ Choice nomination. While she is predicted to earn another nomination from SAG-AFTRA for “Ozark” this year, she is also in contention for a project on the film side, “The Assistant.” And based on voters’ demonstrated love for her performance in “Ozark,” she could very well be a stealth Best Actress contender for her decidedly different turn in “The Assistant.”

In the film, Garner plays Jane, an assistant who works at a film production company who suspects her boss is a sexual predator engaging in affairs at the office. The actress gives a largely internalized performance, relying on subtle facial gestures and body language to suggest her growing dismay at the toxicity of her workplace. Garner thus far has received Best Actress nominations from the Columbus Film Critics Association and the Indiana Film Journalists Association, and finished runner-up at the Boston Society of Film Critics. While she hasn’t been a major player in the Best Actress discussion yet, SAG might just be the friendliest place for Garner, who is in the top 20 in Gold Derby’s odds.

SEE ‘Ozark’ will more than double its Golden Globe nominations total, according to predictions

The SAG Awards are known for making some left-field choices in the Best Actress race over the years. 2015 is a prime example, when voters snubbed eventual Oscar nominees Jennifer Lawrence in “Joy” and Charlotte Rampling in “45 Years” in favor of Helen Mirren in “Woman in Gold” and Sarah Silverman in “I Smile Back.” Neither Mirren nor Silverman was nominated for any other major precursors that year.

Then there’s the fact that Garner’s film has been out for nearly a year — “The Assistant” hit theaters Jan. 31, 2020. Pre-COVID times feel like decades ago, but visibility and early releases and screeners go a long way at the SAG Awards, where we’ve seen lots of late releases get snubbed on both the film and TV sides. “Joy” and “45 Years” were both Christmas Day releases in 2015, while “Woman in Gold” and “I Smile Back” opened months before, the former in April.

So even though Garner might not land recognition with groups like the Golden Globes or Critics’ Choice, there is still precedent for actresses like her, whom SAG-AFTRA already likes, to show up on nomination morning.