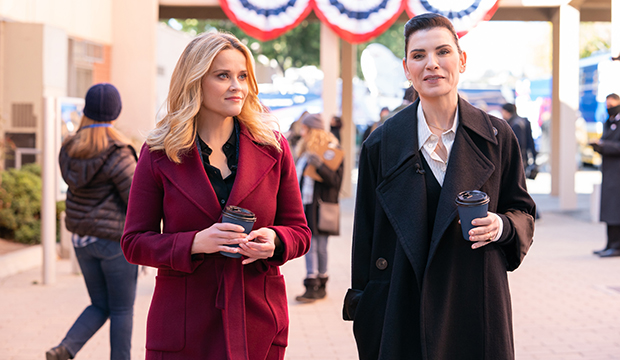 Julianna Margulies is back on TV with “The Morning Show,” which means the former queen of the Screen Actors Guild Awards could soon reclaim her crown.

Margulies, who joined the second season of the Apple TV+ series as UBA anchor Laura Peterson, is currently in fifth place in the early SAG Awards odds for TV drama actress, trailing co-star Jennifer Aniston (who won in 2020), Sarah Snook (“Succession”), Elisabeth Moss (“The Handmaid’s Tale”) and co-star Reese Witherspoon. Not only that, but “The Morning Show” is in third place in the odds for drama ensemble — a category it has yet to crack — behind “Succession” and “The Handmaid’s Tale,” and ahead of “Pose” and former two-time champ “This Is Us.”

These two nominations would bring Margulies’ overall nomination count to a whopping 21 — tied for second most with Julia Louis-Dreyfus behind 22-time nominee Edie Falco. Margulies’ bids have all come in TV — she has had nine drama actress nominations for “ER” and “The Good Wife” combined and 10 in drama ensemble for both shows.

An eight-time winner — four in drama actress (two each for “ER” and “The Good Wife”) and four in drama ensemble for “ER” — Margulies set the record for the most SAG wins in 2011 and was later joined by Alec Baldwin (all for “30 Rock”). They shared it until 2018, when Louis-Dreyfus nabbed comedy actress and ensemble awards for “Veep,” setting a new benchmark of nine victories. So this means Margulies would tie JLD with one win and would set a new double-digit record of 10 awards if she wins both categories.

That’s not all though. Margulies already holds the record for the most drama actress prizes at four, so she could extend her own record and would be the first person to win the category for three different shows. The five wins would also tie her with Louis-Dreyfus as the only actresses in either TV genre to take home five individual statuettes. (Baldwin owns the overall individual record with seven, which he won consecutively.) She would be the first 10-time nominee in the category as well; the next closest are seven-time nominees Falco, Gillian Anderson and Kyra Sedgwick.

It’s a lot and we shouldn’t get too ahead of ourselves here. For one, if the drama actress lineup does shake out this way, Margulies would have to do what Anderson just did for “The Crown”: win for a supporting performance against your own show’s two leads. Margulies just made her “Morning Show” debut in the third episode, which dropped on Friday and ended with an out-of-nowhere kiss between Laura and Witherspoon’s Bradley Jackson. Aniston could also easily win again since SAG-AFTRA does like repeat winners. And then there’s the “Succession” of it all. The Emmy champ has never been nominated for a SAG Award, but that’ll certainly change this time around with its highly anticipated third season, which premieres Oct. 17. If anyone can take down the Roys, it might just be the former SAG queen herself.