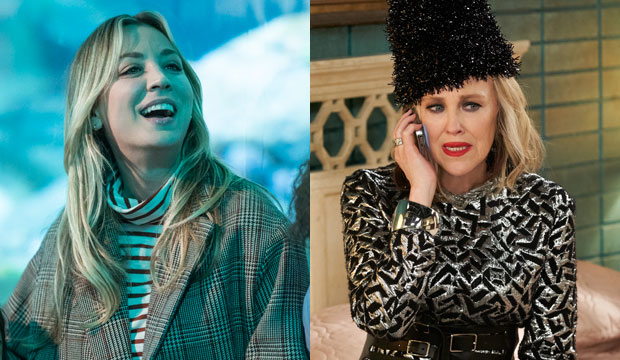 Look out, Emmy-winning legend Catherine O’Hara! There’s another TV comedy veteran that is nipping at your heels for her first Golden Globe win in Best TV Comedy Actress: Kaley Cuoco. After decades in showbiz and 12 seasons as Penny on the blockbuster CBS sitcom “The Big Bang Theory,” Cuoco finally scored her first-ever Golden Globe nominations as star and executive producer of HBO Max’s popular comedy-drama mystery hybrid “The Flight Attendant.”

Soon after “The Flight Attendant” premiered on HBO Max late last fall, fans and critics flocked to it. It became an instant watercooler show, helping it land a second season renewal from the premium streamer. Based on the Chris Bohjalian novel of the same name, “The Flight Attendant” stars Cuoco as the party-girl title character, Cassie Bowden. After she hooks up with passenger Alex Sokolov (Michiel Huisman) in Bangkok, she wakes up the next morning to his bloodied corpse lying next to her, with no memory of what happened the night before. That sets her on a chaotic journey to figure out what happened, why it happened and how the heck she’s going to make it through this disaster in one piece.

For Cuoco to walk away with her first Globe, she’ll have to defeat three other headliners in brand new comedy series: Lily Collins (“Emily in Paris”), Elle Fanning (“The Great”) and Jane Levy (“Zoey’s Extraordinary Playlist”). Cuoco also has to contend with comedy legend O’Hara (“Schitt’s Creek”), who’s still basking in her Emmy triumph in the corresponding category last fall.

Don’t be too surprised if Cuoco can pull off an upset against O’Hara though. Firstly, “The Flight Attendant” is a hit with critics, with an impressive fresh rating of 98% at Rotten Tomatoes. It has also proven to be a commercial hit, as the murder-mystery dark comedy experienced “week over week growth and ranked as HBO Max’s No. 1 series overall during its run,” as HBO Max shared when announcing the show’s renewal.

But more importantly, anyone that has been paying attention to the Golden Globes over the years knows that they have a long history of embracing new shows. They’re infatuated with freshman series and performers. So place a shiny new toy in front of them and they just can’t help themselves, particularly in this category. Over the last 10 years, winners in the Best TV Comedy Actress race have included Rachel Brosnahan (“The Marvelous Mrs. Maisel”) for her first two seasons in 2018 and 2019, Rachel Bloom in 2016 for first-year “Crazy Ex-Girlfriend,” Gina Rodriguez for the first season of “Jane the Virgin” in 2015, Lena Dunham for “Girls” season one in 2013 and Laura Dern for the first season of “Enlightened” in 2012.

SEE2021 SAG Awards TV Nominations Forums Reactions: Cheers For ‘The Flight Attendant,’ Jeers For ‘This Is Us’ Snubs

While the “shiny new toy” rule would also apply to “Emily in Paris,” “The Great” and “Zoey’s Extraordinary Playlist,” those shows premiered earlier and arguably didn’t make as strong of a pop-cultural impact as “Flight” has. (“Flight” made such a strong impression it even managed a couple of SAG nominations even though those awards are usually slower to embrace new shows.) And the HFPA have never been fans of “Schitt’s Creek.” Sure, they doubled down this year and showered it with nominations, but the show, which ended last year, is practically ancient by Globe standards compared to “The Flight Attendant.”

So the stakes are high for HBO Max as the Globes are the first real awards test for “The Flight Attendant.” The way it performs here may well preview its overall awards potential going forward, particularly later this summer and fall during Emmy season. So look out for Cuoco to surprise many and take this home.