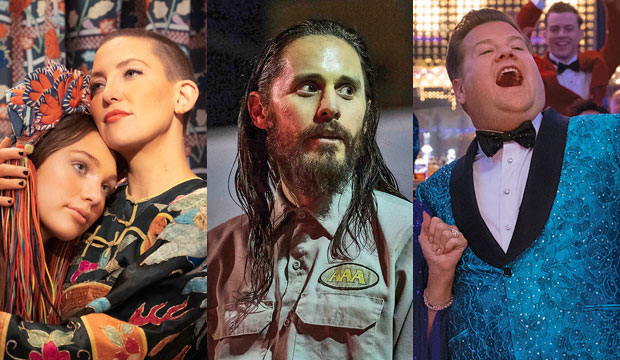 Given the unusual pandemic circumstances of this year’s awards race, Gold Derby users did pretty well predicting the 2021 Golden Globe nominees, which were announced Wednesday morning. From the 11 film categories we were betting on, with 55 nominations in all, our odds were right 41 times and missed 14 times, with a number of major jaw-droppers. Scroll down to see the nominees who took us by surprise, and check out the complete list of nominations here.

The biggest shock of all was the inclusion of Sia‘s directorial debut, “Music.” The film was not in our odds at all but managed nominations in both Best Film Comedy/Musical and the corresponding Best Actress category for Kate Hudson. Also out of left field was Jared Leto for “The Little Things” in Best Supporting Actor. The film only just dropped on HBO Max last weekend and wasn’t anywhere near our expected top contenders in the supporting actor category — out of thousands of our users, only five saw that coming. Tahar Rahim was the other notable miss for us, getting into the tough Best Film Drama Actor field for “The Mauritanian.”

We were close to predicting “Promising Young Woman” in several categories but were only set on star Carey Mulligan getting into Best Film Drama Actress. The HFPA actually went for that revenge thriller in a big way, nominating it in Best Film Drama, Best Director for Emerald Fennell and Best Screenplay, also for Fennell. Other dark horse contenders that ended up making the nominations list included Andra Day for “The United States vs. Billie Holiday,” James Corden for “The Prom,” Jodie Foster for “The Mauritanian” and Helena Zengel for “News of the World.”

OUT OF NOWHERE
These nominees were so shocking they weren’t even in our predictions center.

BIG SURPRISES
These nominees got in despite being 100/1 underdogs in our odds.

CLOSE CALLS
We knew these contenders had a chance, but they weren’t among our top five predicted nominees.