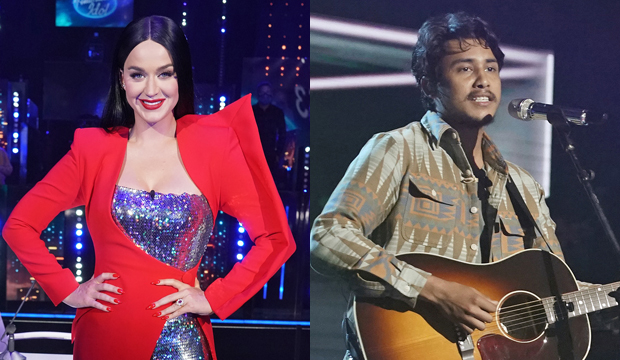 During Sunday’s three-hour finale of “American Idol,” host Ryan Seacrest cryptically mentioned how Graham DeFranco had to fill in at the last second to sing with superstar Sheryl Crowe. But what viewers didn’t realize is that Graham had replaced Arthur Gunn, who was a no-show.

When asked about what happened with Gunn, judge Katy Perry simply called the controversy another “curveball” for this buzzed-about 19th season. It’s likely she was referring to two other singers who had exited the competition off-camera during the live shows: Wyatt Pike for personal reasons and Caleb Kennedy when a controversial video resurfaced.

“Quite honestly, we’ve had a very colorful season [with] curveballs galore,” Perry explained during a post-show question-and-answer gala with reporters, according to EW. “But Graham DeFranco? I mean, killed it. Sang so well, and I was so glad he was there.”

Perry’s fellow judge Luke Bryan explained a bit further, saying, “DeFranco literally came to cheer. He was there to support Chayce, and we’re pulling him out of the crowd going, ‘You’re gonna sing with Sheryl Crow.’ And he’s like, ‘Hell yeah!'”

Crowe and DeFranco sang her hits “If It Makes You Happy” and “Everyday is a Winding Road” on live television shortly after Grace Kinstler‘s shocking elimination. That left only two people still in the competition to win the title: Chayce Beckham (who ultimately prevailed) and Willie Spence (who earned the runner-up position).

As of this article’s publishing time, neither Gunn, Crowe or DeFranco have made any public statements about what went on behind the scenes. DeFranco was originally eliminated in the Top 16, but he later appeared virtually at the homes of some of his fellow competitors.

Gunn’s two-year journey on “American Idol” came to an end during the Top 7 episode. This 23-year-old artist from Wichita, Kansas originally appeared during last year’s Covid-interrupted 18th season, with Just Sam beating him for the title. Arthur joined the current competition when the live shows began after winning America’s vote as the first-ever comeback contestant, triumphing over such fan-faves as Louis Knight and Makayla Phillips.

Arthur’s time on Season 19 was relatively short, as he only delivered four performances: “Iris” (Comeback song), “Remember Me” (Disney week), “In My Place” (Coldplay song) and “Simple Man” (Mother’s Day song). He synced up with the rest of the Top 7 after they enjoyed a fun week at Walt Disney World Resort in Florida.