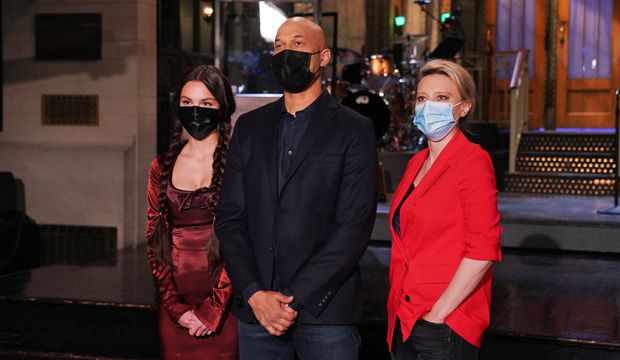 Keegan-Michael Key hosted his first episode of “Saturday Night Live” on May 15, with musical guest Olivia Rodrigo. The hosting gig comes after a busy 2020 for Key, who had sizable roles in two movie musicals, “The Prom” and “Jingle Jangle: A Christmas Journey,” with another musical project, “Schmigadoon,” coming in July on Apple TV+. And for his “SNL” monologue, Key kept in the musical spirit.

SEE Will Bowen Yang be the next ‘SNL’ breakout at the Emmys?

The actor discussed growing up a block south of 8 Mile Road in Detroit and watching “SNL” religiously, so he was honored to be onstage hosting all these years later. Key then launched into a song about wanting to do “every single ‘SNL’ thing tonight.”

This included not only performing in sketches but also kissing every member of the cast and getting a tattoo from Pete Davidson. As the song continued onward, cast member Cecily Strong joined him onstage to tell him to wrap it up, with so much show to get to.

Not to be outdone, Key checked off another “SNL” hosting staple by fielding questions from the live audience. One audience member asked what it was like to win an Oscar for “Get Out,” clearly mixing him up with his former “Key and Peele” co-star Jordan Peele. Cast member Kenan Thompson then came out to do his own clarification, explaining that despite having similar first names, he and Key are, in fact, different people. The monologue concluded with Key belting out “Everything’s Coming Up Keegan” to a rapturous studio audience.

Key’s former show “Key & Peele” was an old Emmy rival of “SNL” in the Best Variety Sketch Series category. “Key & Peele” won the Emmy for its final season over “SNL” in 2016. This marked the most recent instance of a show beating “SNL” in this category, with the NBC sketch series having now won four years in a row.