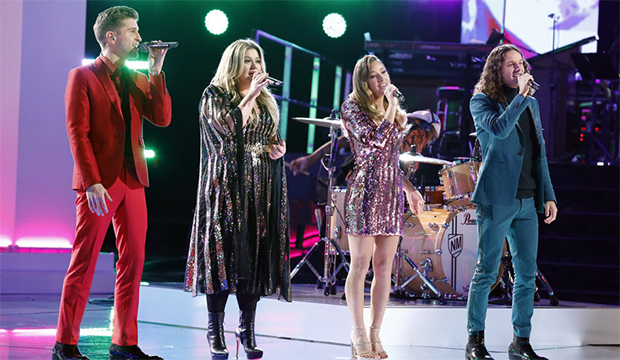 In “The Voice” Season 21 finale, Kelly Clarkson won her fourth career trophy thanks to the history-making trio known as Girl Named Tom. (Read our minute-by-minute recap.) The sibling band from Pettisville, Ohio is comprised of Caleb Liechty (26), Joshua Liechty (24) and Bekah Liechty (20) and will now forever be known as the first-ever group to win “The Voice.” It was a fitting end for Girl Named Tom, as they were the very first blind audition shown to audiences back in September, where they earned a four-chair turn.

As for the other finalists, Paris Winningham (Team Blake) came in third place, Hailey Mia (Team Kelly) finished in fourth place and Jershika Maple (Team John Legend) wound up in fifth place. Did America get it right? Let us know down in the comments section.

Some of the A-list superstar musical guests who performed during the results show were Carrie Underwood, Coldplay, Ed Sheeran, Alicia Keys, Walker Hayes, Keke Palmer and Tori Kelly. In addition, Kelly, Blake and John sang songs with their finalists. Alas, new coach Ariana Grande didn’t have any artists left as her last contestant was eliminated in the semi-finals.