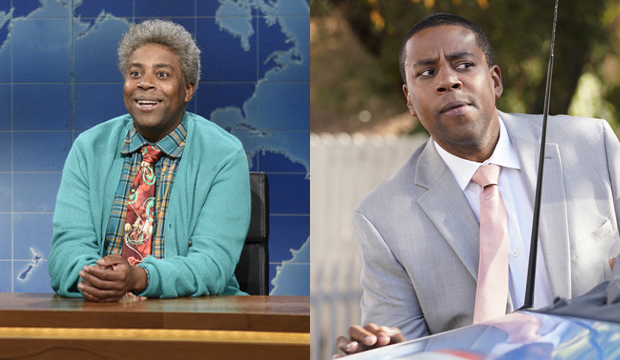 Will Heath/NBC and Casey Durkin/NBC

The 2021 Emmy nominations won’t be announced until July 13, but I’m already prepared to make an early plea to the voters: Kenan Thompson deserves two acting nominations this year. The funnyman has twice been recognized in Best Comedy Supporting Actor for his work on “Saturday Night Live” (2018 and 2020), and now he’s the star of his own sitcom, “Kenan,” for which he’ll contend for Best Comedy Actor. Of course, Thompson took home his first Emmy in 2018 for Best Music & Lyrics for the “SNL” song “Come Back, Barack,” but he’s never won for acting.

Thompson continues to sparkle every weekend on “Saturday Night Live,” now in its 46th season on NBC. He’s been a staple on the late-night sketch series since 2003, making him the longest-serving cast member of all time.

Just last week Thompson joined a visibly nervous Regina King on stage to help her out with her monologue (watch below). “Trust me, you’ve got nothing to worry about,” he told the Oscar winner. “This show has been on the air for like, I don’t know, 20 years. It’s a well-oiled machine just like the Hindenburg.” Thompson then served as King’s hype man, scolding audience members for not making “enough noise” during her monologue.

“Kenan” premiered on February 16 to glowing reviews. The multi-camera comedy stars Thompson as a grieving widower who hosts a morning talk show. Back at home, he struggles with how to talk to his two daughters about their late mother, and gets help from his brother (“SNL’s” Chris Redd) and his father-in-law (Don Johnson). “Saturday Night Live” showrunner Lorne Michaels also produces the sitcom for NBC.

Variety‘s Caroline Framke points out how “Kenan” is a “smart embrace of Thompson’s strengths as a performer, plus a bittersweet streak of tenderness.” CNN‘s Brian Lowry notes that the show gives Thompson a “ready-for-primetime chance to demonstrate he can handle more than just one-liners.” And TV Guide‘s Diane Gordon writes, “While ‘Kenan’ may not be groundbreaking comedy on its face, it provides much needed emotional comfort and laughs and that’s invaluable right now.”

If I’m right that Thompson will be Emmy-nominated for both “SNL” and “Kenan,” he’d be the latest in a long line of people to contend for two different roles at the same time. Last year Jason Bateman pulled double duty for “Ozark” and “The Outsider,” while Ann Dowd did the same a few years earlier for “The Handmaid’s Tale” and “The Leftovers.” Other double-dippers include Sarah Paulson for “The People v. O.J. Simpson” and “American Horror Story,” Riz Ahmed for “The Night Of” and “Girls” and Matthew Rhys for “The Americans” and “Girls.” And then there’s Laurie Metcalf, who earned a whopping three acting nominations for “Getting On,” “Horace & Pete” and “The Big Bang Theory” in 2016.