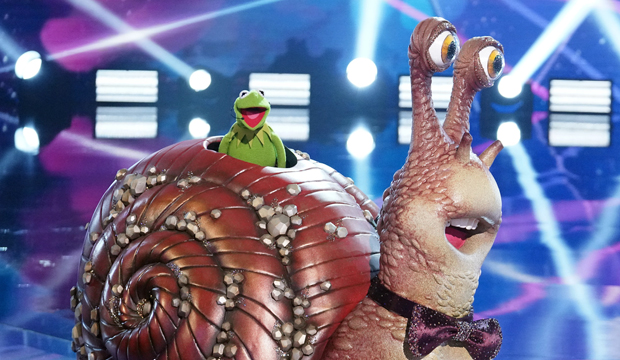 Season 5 of “The Masked Singer” premiered on Wednesday night, introducing five new mystery celebrities disguised in wild, extravagant costumes. After each singer from Group A took the stage, it was the Snail sent packing first after his performance of “You Make My Dreams (Come True)” by Hall & Oates. In one of the most shocking reveals ever, the Snail was none other than movie star, Oscar winner and A-list amphibian, Kermit the Frog.

SEEWhat happened to Nick Cannon on ‘The Masked Singer’? Niecy Nash sends him ‘all the good vibes’

“As they say, it’s not easy being green,” Kermit told guest host Niecy Nash during his unmasked interview. “But sometimes it’s even harder being a snail. And I’m never gonna hear the end of this from Miss Piggy. I’ve had just a great time being here. It’s really been a pleasure.”

Panelists Ken Jeong, Jenny McCarthy, Nicole Scherzinger and Robin Thicke were all flabbergasted to see the Muppet pop his little green head out from inside the Snail’s shell. “The most famous guest on ‘The Masked Singer’ ever!” exclaimed Ken upon Kermit’s reveal. Ken’s final guess was Jay Leno while Robin thought the Snail was Seth MacFarlane, Jenny went with Ted Cruz and Nicole predicted Billy Crystal.

Despite the panel’s misguided guesses, various hints from the Snail’s clue package pointed them straight to Kermit. The giant Teddy bear in Snail’s package was a clue to Kermit’s best friend, the lovable Fozzie Bear. The Swedish meatballs in his package were a clue to the Muppets’ very own Swedish chef.

Kermit was outdone in his Group A performance by Raccoon, Robopine, Russian Dolls and Seashell. Next week Black Swan, Chameleon, Grandpa Monster, Phoenix and Piglet will take the stage for the first time in Group B. Did you guess Kermit the Frog was hiding behind the Snail mask?