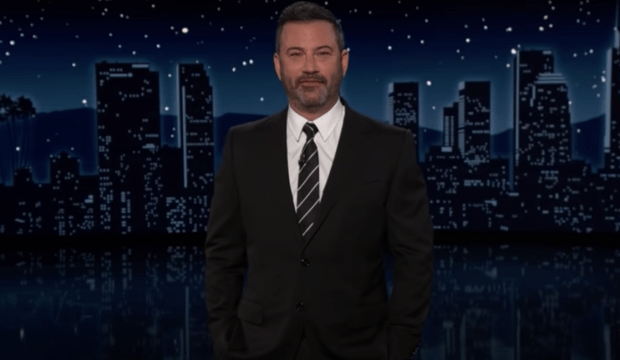 Former President Donald Trump was reportedly so enraged by jokes at his expense, he allegedly asked his advisors about what legal recourse they to stop the likes of “Saturday Night Live” and Jimmy Kimmel from goofing on him. According to a report from The Daily Beast, Trump wanted the shows probed, perhaps even by the Department of Justice, but the conversations went nowhere.

On Tuesday’s episode of “Jimmy Kimmel Live,” Kimmel was tickled pink. His recently returned studio audience cheered and applauded when he read an excerpt from the report about Trump wanting to investigate him.

Kimmel couldn’t get over how absurd it was. “Can you imagine that? President Snowflake asked to send the authorities in to stop us from making fun of him,” he said. “Not only that, he wanted Guillermo to pay for the wall,” referencing his sidekick Guillermo Rodriguez, who’s from Mexico.

“The report goes on to say, ‘To those who heard it, Trump’s inquiries into what federal regulations could be used to bust the likes of Kimmel and “SNL” was more of a nuisance than a constitutional crisis,” he said. “To me it feels more like a crisis than a nuisance, I don’t know. Little did I know – I’m up here goofing on him – he’s asking the Feds to do who the hell knows what?”

Kimmel joked that Trump wanted to turn the Department of Justice into the Penguin’s bowler hat-clad henchman from the old Adam West “Batman” show – a “goon squad, a bunch of tough guys to go rough people up because he can’t take a joke. He can make one. In fact, he’s made several – Eric, Ivanka, Don Jr. – but he cannot take a joke.”

Kimmel added that this inquiry reportedly happened in early 2019, around the time Trump met with North Korean leader Kim Jong-un. “Maybe he got the idea from him,” Kimmel speculated. “I could be dog food right now. I’d be like ‘Alec Baldwin’s the one you want! He dressed up as you!’”

Then, just as Kimmel was getting ready to tape the show, Trump released a statement that said “The story that I asked the Department of Justice to go after ratings-challenged (without Trump) Saturday Night Live, and other late-night losers, is total Fake News,” and also “I do believe that the 100% one-sided shows should be considered an illegal campaign contribution from the Democrat party.”

Kimmel said that he believes Trump did inquire about investigating him, and thanked him for watching the show. “I’ll send you a hoodie if you like,” he said. “You still a XXXL?”