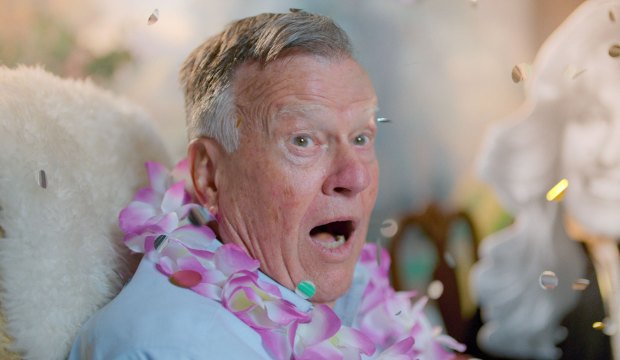 The multi-award-winning documentary “Dick Johnson is Dead” all began with a dream. Five years ago, acclaimed cinematographer and documentary filmmaker Kirsten Johnson had a dream of seeing a man in a casket. And that man was very familiar to her — it was her widower father Dick Johnson. Her father, she recalled directing a recent Zoom conversation with noted Brazilian documentarian Petra Costa, told her, “‘I’m Dick Johnson and I’m not dead yet.’ The dream woke me up. It woke me up to the idea that I was running out of time with my dad.”

Thus, was the genesis of “Dick Johnson is Dead,” a poignant, funny, revealing and sad portrait of her relationship with her father who is descending into dementia. A decidedly non-traditional documentary, she copes with her father’s dementia by staging his death in various crazy ways-stand-ins were used for these sequences-including having an air conditioner fall out a window and land on his head. And yes, she even stages a mock funeral in a church so he can watch friends and family wax poetic about him. Audiences and critics fell in love with the film and especially the engaging Dick Johnson at the 2020 Sundance Film Festival where it won a U.S. Documentary Special Jury Award for innovation in non-fiction storytelling.

Since it premiered on Netflix in October, “Dick Johnson” has retained its 100% fresh status on Rotten Tomatoes and has earned several other honors including three Critics Choices Documentary Awards including best doc, best director and most compelling living subject of a documentary for Dick Johnson. The film recently made the Oscars shorlist for Best Documentary Feature.

PREDICT the Oscars nominations; change them until March 15

Johnson initially decided to shoot the funeral sequence with him in the casket during the service. Her father was game, “he wanted to play,” but her brother shot down the idea. “My brother said, ‘Over my dead body.’ It was sort of thrilling in a certain way how strongly my brother reacted and what it provoked in me-that was very strong feeling of like ‘I’m going to make this movie with my brother and my father.”’

One caveat, she would not force anyone to do anything.

So, she decided to shoot her father in the casket on a separate day “and then we could green screen that in. It was a more sophisticated solution. It allowed my father to be up in the balcony with headphones on listening to the funeral. It allowed some sort of cinema magic.” But two days after she shot the funeral sequence, Johnson woke up extremely depressed. “I thought my dad would never have to die since we’d done the funeral. I woke up and I was like ‘Oh my goodness that won’t stop it from happening.”’

When she first came up with the idea for the documentary, she was in denial her father had dementia. “Having lived with my mother’s Alzheimer’s I was like ‘I’m not losing this one to dementia.’ So, when we actually got started, the dementia was on, it was happening. It was further along than I had imagined it because I didn’t want it to be.” There are moments of lucidity and clarity with people in the throes of dementia, she noted, and “it has moments of utter lost in spaciness. And in the course of a couple of hours, a person can be all over the map like that.”

Dick Johnson, said his daughter, has watched the film “hundreds and hundreds of times” and has forgotten the film. “He’ll be watching a scene of the film and he’s forgot he’s watched it. He’ll forget that it exists. He’ll forget that we made it. And he’ll remember we made it.” Her father, who is still alive, went to all the screenings last year at Sundance and “stood outside and was getting hugged by people and sort of turned to me and said, ‘I’m not sure how this happened, but I’m loving it.’”