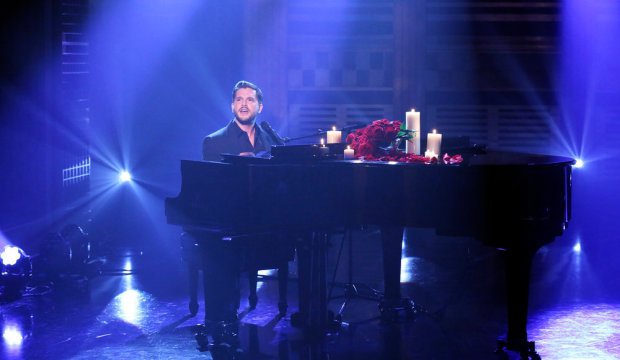 Thursday was Jimmy Fallon’s 1500th episode of “The Tonight Show,” and the host celebrated the milestone in a typically goofy and musical way. He faux-dramatically explained that for years, he and the show’s writers have had an idea called “Straight Up Goes for It,” in which somebody comes out and just sings Train’s 2001 soft-rock hit “Drops of Jupiter” as well as they can. Everyone he’s asked – including singers and actors who sing – has passed on it… until now.

The brave soul who had the willingness and the lack of ego to straight up go for it was “Game of Thrones” star Kit Harington. The clip of the erstwhile Jon Snow confidently singing despite not totally knowing the words or the tune is guaranteed to put a smile on your face this Friday morning.

Harington pretended to play piano (acting!) and sang his heart out. He didn’t sound very good, but sounding good isn’t the point of “Straight Up Going for It.” The point is to do it. And he did it.

He was accompanied by The Roots. Part of the joke is that they had to learn how to play “Drops of Jupiter.” Or maybe they already knew it! Maybe Questlove is a big Train head.

Kit Harington has been out of the public eye since “Game of Thrones” ended two years ago, and it’s great to have him back, especially if he’s doing stuff like this. As Fallon said, “he’s cool and he’s funny and he gets it.”

'House of the Dragon,' the 'Game of Thrones' prequel, finally gets a release date from…

Jimmy Fallon has jokes about these ill-fated Olympics