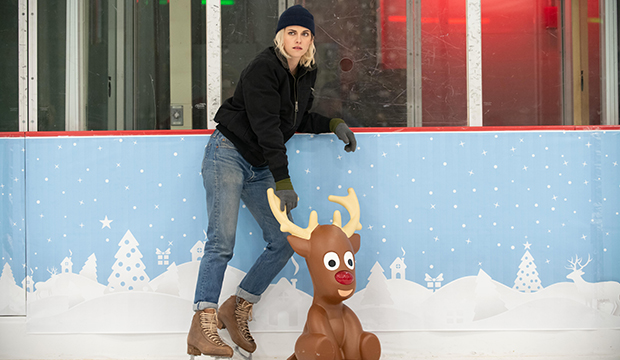 When it comes to holiday movies, very few have been considered awards-worthy, most likely due to their lighthearted nature and schmaltzy, winter wonderland backdrop. But Kristen Stewart has received buzz for “Happiest Season,” a romantic comedy released on Hulu in November in which she plays a queer woman who accompanies her girlfriend (Mackenzie Davis) home for Christmas. Things get awkward when she learns that her girlfriend’s family doesn’t know she’s gay — and Stewart’s ability to navigate dramatic elements within this twist on a traditional rom-com could land the “Twilight” star her first Golden Globe nomination.

Stewart ranks just outside the top 10 in our overall odds to earn a Globe nom for Best Film Comedy/Musical Actress. With 100/1 odds, her chances may look bleak, but this category is wide open and ripe for surprises. Gold Derby expert Thelma Adams is currently predicting Stewart will not only reap her first bid, but take home the prize. The actress also has support from one Top 24 All-Star User (Damiansport1), who predicts Stewart will be among the five nominees announced on Feb. 3.

“Happiest Season” is a semi-autobiographical take on director Clea Duvall‘s experience with her own family. Alison Brie, Dan Levy, Aubrey Plaza, Victor Garber and Mary Steenburgen provide comic relief as supporting actors alongside Stewart and Davis. Critics have praised the love story, and the film has a Rotten Tomatoes rating of 83. Kyle Bain (Film Threat) writes, “Every moment of the film is emotionally enthralling, perfectly bittersweet, and calculatedly daring, leading viewers down a beautiful path of hope and love that should award Happiest Season the success that it deserves.”

After wrapping the fifth installment of “The Twilight Saga” in 2012, Stewart has divided her time between roles in small indie films like “Still Alice” (2014) and “Personal Shoppers” (2016) and big-budget studio productions such as “Charlie’s Angels” (2019) and “Underwater” (2020). Her most acclaimed role to date was in “Clouds of Sils Maria” (2014), for which she won various critics prizes, including Best Supporting Actress from the National Society of Film Critics and the César Awards. Could a Golden Globe nomination for “Happiest Season” be within reach?

The Golden Globes haven’t exactly been generous when it comes to holiday-themed films. “Love Actually” (2003) felt the love from the Hollywood Foreign Press Association when the Christmas flick scored a pair of nominations for Best Comedy/Musical and Best Screenplay. It wound up losing both bids to “Lost in Translation,” and the all-star cast was completely snubbed.

Meryl Streep is currently the odds-on favorite to win Best Film Comedy/Musical Actress for “The Prom,” with 39/10 odds. Michelle Pfeiffer in “French Exit” (4/1 odds), Maria Bakalova in “Borat: Subsequent Moviefilm” (9/2 odds), Rashida Jones in “On the Rocks” (5/1 odds) and Anya Taylor-Joy in “Emma” (8/1 odds) round out the top five. Last year’s champ was Awkwafina for her turn as Billi Wang in “The Farewell.”