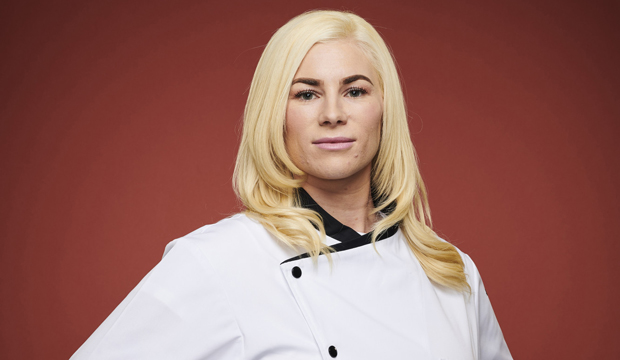 “This definitely isn’t the way I wanted to leave ‘Hell’s Kitchen‘ tonight,” revealed Lauren Lawless after being eliminated by Chef Gordon Ramsay in the show’s eighth episode. This 30-year-old private chef from San Diego was one of the four contestants who competed in the cook-for-your-life challenge, and she was sent home when her filet mignon didn’t impress the host. “Going out for having an underdone steak with two minutes more to go, it really sucks. But I’m gonna keep holding my head high. I came in here as ‘Flawless Lawless’ and I’m still leaving here ‘Flawless Lawless.’ Nobody can take that away from me.”

Lauren was previously nominated for elimination in the third and fifth episodes, but she managed to survive both of those instances. Unfortunately, she couldn’t survive this third stint on the block. “I just want to say how thankful I am for the opportunity and I’m grateful and honored to learn from you,” Lauren told Ramsay before handing over her jacket.

The world-renowned British chef responded by promising to help Lauren out in the future, should she ever need it. “My door is definitely open,” he proclaimed in a rather human moment. “Head up high and good luck.”

Lauren was eliminated over her fellow Red Team member Jordan Savell and both of the Blue Team contestants, Marc Quinones and Amber Lancaster. These four were chosen to compete in the cook-for-your-life challenge by team leaders Nicole “Nikki” Hanna and Cody Candelario, who earlier in the episode caught Chef Ramsay’s attention with their strong dishes in the craps-inspired reward competition.

As the credits rolled, Chef Ramsay explained his decision in voice-over: “If you can’t fit in with the pack, you better be the top dog. But Lauren was bringing up the rear.”

Following Lauren’s elimination, only nine chef-testants remain in the running to win a head position at the Hell’s Kitchen Lake Tahoe Restaurant: Nikki, Jordan, Kori Sutton and Mary Lou Davis of the Red Team and Cody, Marc, Amber, Adam Pawlak and Declan Horgan of the Blue Team. Who are you personally rooting for to win this 19th season of Fox’s reality TV show? Sound off down in the comments section.