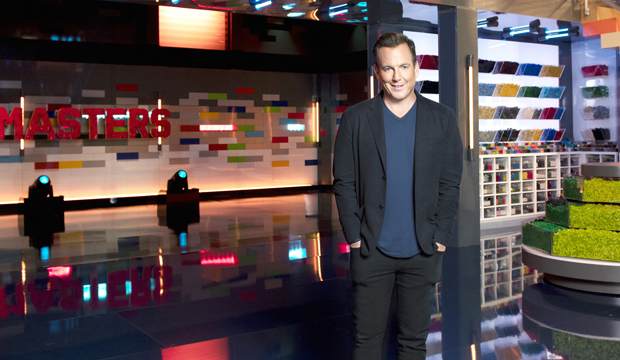 Now that the Olympics are over, “Lego Masters” returned to the airwaves with the seven remaining teams competing in a breathtaking weather-based challenge. This week the duos were tasked with building mini-worlds that showcased centerpieces big enough and strong enough to withstand a 60-mph wind machine. The half-dozen successful teams advanced to the Top 6, while the losing team was eliminated from the competition. Will Arnett hosted the episode with expert Brickmasters Amy Corbett and Jamie Berard returning as judges.

Below, read our minute-by-minute “Lego Masters” recap of Season 2, Episode 7, titled “Bricking Wind,” to find out what happened Tuesday, August 10 at 8:00 p.m. ET/PT. Then be sure to sound off in the comments section about your favorite aspiring builders on Fox’s reality TV show and who you think has what it takes to join the winners list. Here are the teams still in the competition:

8:00 p.m. — “Previously on ‘Lego Masters!” In the sixth episode, friends Dave & Richard won the “Demolition Derby” challenge by staying in the ring the longest. That victory immediately shot them to front-runner status, as they’re the only duo to win two main challenges. The bottom two teams were friends Susan & Jen and brothers Caleb & Jacob, with the Brickmasters deciding to send home the female duo because their creation lacked detail and pieces broke off quite easily. But enough about last week — let’s get to the seventh episode!

8:10 p.m. — The teams walk into the build room as a massive windblast hits them in the face. Will explains Legos is about to become an all-weather sport and they’ll have to build a structure able to withstand a 60mph wind. Natalie & Michelle are feeling strong because Michelle’s husband works on wind turbines. I’m not sure how that will be helpful, but I hope it is for their sake. Across the room, Mark & Steven are hoping to redeem themselves after faltering in prior strength challenges. If they’re feeling nervous, they can always whip out their golden brick and save themselves from elimination.

8:20 p.m. — Maria & Philip spent an hour working on a windmill feature that they now realize will have to be scrapped. Feeling deflated, Maria has to rethink her strategy as Philip works on the main structure. As Will chats with the Brickmasters, they remind him that this challenge is not just about strength. The structures have to look nice aesthetically as well. Over at Maria & Philip’s station, Philip decides he would be better suited for building a suitable windmill. He trades places with his wife and hopes he has better luck in this moving piece than she did. Meanwhile, Zack & Wayne are having their own troubles after determining their structure isn’t strong enough. They’ll spend some time on a rebuild and hope for better results. Throughout the challenge, teams have an opportunity to test their builds with a smaller, less powerful fan. During Dave & Richard’s test, their coolest feature fails to work. Back to the drawing board for them as well!

8:30 p.m. — Zach & Wayne think they have sufficiently strengthened their structure and are now working on tiny details that they hope will really impress the Brickmasters. With just an hour left to build, Bryan and Lauren are instructed to add color to their mostly drab, gray structure. Will they have enough time to make their underwater world more vibrant?

8:50 p.m. — Times up, bricks down! It’s time to take a look at all of these wind-powered creations. Natalie & Michelle are up first and their “A Child’s World” is praised for it’s aesthetics and is able to withstand 45 mph wind before blowing apart. Zack & Wayne’s “Oasis” scores major points for its storyline and holds strong to 55 mph winds. Lauren & Bryan’s “Tidal Turbine Tango” is criticized for the gray base and flies apart at 55 mph. Mark & Steven declined the use of their golden brick and their “Wind Powered Terraforming” is praised for color and withstands winds to the max speed of 60 mph! Dave & Richard’s “Gnome Matter the Weather” is called “quirky,” “colorful,” and “exciting,” but shatters when the wind hits 50 mph.

8:55 p.m. — Caleb & Jacob’s “Portal to Atlantis” has fantastic detail, but the Brickmasters are skeptical it will hold up in a windstorm. They prove the Brickmasters wrong and max out the wind machine at 60 mph! Last up are Maria & Philip with “New Tinkerton City.” It’s an imaginative and colorful world filled with stories, but the Brickmasters think the build lacks a little “finesse.” To make things worse, the windmill falls apart with just a 20 mph gust. Ouch!