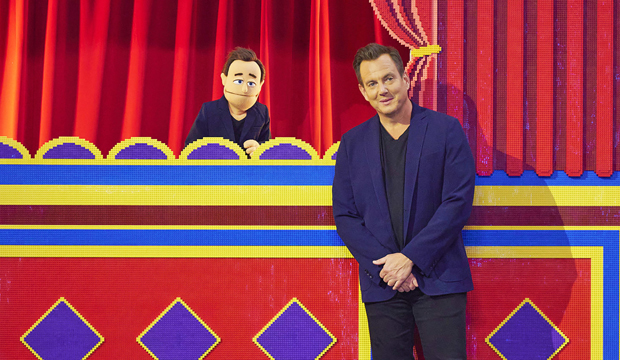 This week on “Lego Masters,” the remaining six teams had 10 hours to build their very own puppets out of Lego bricks. Later, the duos worked together to bring their creations to life in a fun puppet show, with Brickmaster judges Amy Corbett and Jamie Berard paying close attention to detail and storytelling elements. Will Arnett hosted the episode with his new puppet sidekick. So which team pulled the strings of victory and which team was eliminated?

Below, read our minute-by-minute “Lego Masters” recap of Season 2, Episode 8, titled “Puppet Masters,” to find out what happened Tuesday, August 17 at 8:00 p.m. ET/PT. Then be sure to sound off in the comments section about your favorite aspiring builders on Fox’s reality TV show and who you think has what it takes to join the winners list. Here are the teams still in the competition:

8:00 p.m. — “Previously on ‘Lego Masters!” In the seventh episode, friends Dave & Richard won the “Bricking Wind” challenge in which the teams had to create designs that could withstand 60 mph winds. That was their third challenge victory of the season, two more than anyone else. The bottom two teams were married couple Maria & Philip and siblings Bryan & Lauren, with the Brickmasters deciding to send home the spouses because their creation had poor detail and a weak windmill. But enough about last week — let’s get to tonight’s episode!

8:05 p.m. — Who will build a breakout star? And who will just brick? The curtain goes up as the teams gather in the workroom and find out they’ll be building their very own puppets. Each puppet will have to have a unique personality and one movable feature that sets it apart from the rest. They must be lovable and original. When they’re done building their puppets, teams have to put on a puppet show by collaborating with another team. The builders have 10 hours to bring their puppets to life. It’s time to get their brick on!

8:10 p.m. — Here are the teams: Zack & Wayne with Dave & Richard, Mark & Steven with Caleb & Jacob and Natalie & Michelle with Bryan & Lauren. Right off the bat, the team consisting of brothers argue over who gets to build a dragon. They decide Mark & Steven will take on the dragon and Caleb & Jacob will build a sassy princess. The Brickmasters say it will take a lot of creativity to give these puppets “roundness” while building them with rigid bricks.

8:20 p.m. — Aside from the builds, the Brickmasters are excited to see the collaborative side of each team. The first team to create something with a moving mouth is Zack & Wayne, making them early frontrunners in this challenge. Five hours have passed and teams kick it into high gear, working out the mechanics of their puppets. The Brickmasters seem concerned with the weight of Bryan & Lauren’s puppet head, telling them to be mindful when adding more weight because they need it to move.

8:30 p.m. — Natalie & Michelle are nervous they’ve gone “too big” with their singing granny. I love the curlers in this grandma’s hair and she has a ton of personality, but she might weigh too much. Zack & Wayne are fast, strong builders but they’re a little scared about performing on stage. Meanwhile, their partners Dave & Richard might have the upper hand when it comes to performance art, but they need their build to stand up to Zack & Wayne’s.

8:40 p.m. — With one hour remaining in this challenge, the Brickmasters remind us that these puppets are expected to “not break” while they’re onstage. Mark & Steven seem concerned that their dragon’s wings aren’t moving and consider using their golden brick on this challenge. Time is up and all the teams must put their bricks down. It’s time to get this puppet show started! Prior to showtime, Mark & Steven confirm they will NOT be using their golden brick, which means they could be eliminated.

8:45 p.m. — Kicking things off are Dave & Richard and Zack & Wayne who have a Jamaican DJ (DJ Treatz) interacting with a pirate-like fencer named Panachio. I’m not really impressed with the storyline they have, but Panachio has some good sword movement. Next are Mark & Steven with Bernie the Burnt Out Dragon chatting with Caleb & Jacob’s Princess Samantha. Unfortunately, Samantha is just a little too heavy and you can see arms holding her head up as she talks. Last are Natalie & Michelle with their singing grandma, Betty Bricks, and Bryan & Lauren’s Hazel the Princess Pup. Betty is the most fun character and she has some serious singing chops, but her arm falls off mid-belt. Yikes! Despite her malfunctioning arm, she completely upstages Hazel who may be the most forgettable of all.

8:55 p.m. — Zack & Wayne are complimented for Panachio’s flowing cape and his movement between the eyes and mouth. Dave & Richard get kudos for DJ Treatz’ bobbling head and moveable hair, but his body is blocky and lacks attitude. Caleb & Jacob’s Princess Samantha leaves the Brickmasters “almost speechless” because there is so much fantastic movement to the character. Mark & Steven’s Bernie the Burnt Out Dragon is applauded for the beautiful sculpting. Lauren & Bryan’s Hazel the Princess Pup is “cute” but it’s not a very moveable puppet. This puppy could be sent home with its tail between its legs. Finally, Natalie & Michelle’s singing granny, Betty Bricks, is slammed for the arm falling off, but the Brickmasters are highly impressed with Betty’s face.

8:59 p.m. — The top two teams are Zack & Wayne (Panachio) and Mark & Steven (Bernie the Burnt Out Dragon). It was a close call, but the winners are Mark & Steven! Good thing they didn’t give up that golden brick. The bottom two teams are Bryan & Lauren (Hazel the Princess Pup) and Michelle & Natalie (Betty Bricks). The team leaving this week is Bryan & Lauren. Just five teams remain in the competition. Next week, teams will be split up and one teammate will have to create a creature from the sea while the other builds one from land.