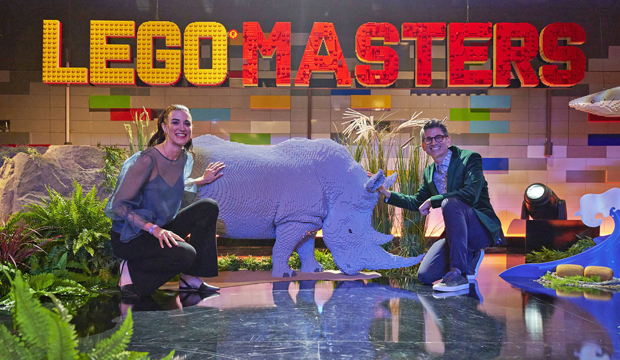 Heading into this week’s all-new episode of “Lego Masters,” the Top 5 teams had finally been revealed: Zack & Wayne (brothers), Mark & Steven (brothers), Natalie & Michelle (friends), Dave & Richard (friends) and Caleb & Jacob (brothers). On Tuesday night, host Will Arnett made the shocking announcement that the five teams would be divided in half, with one member of each duo building a creature that lives on the land and the other person constructing an animal that lives under the sea. As always, Brickmaster judges Amy Corbett and Jamie Berard were on hand to name the week’s strongest and weakest teams.

Below, read our minute-by-minute “Lego Masters” recap of Season 2, Episode 9, titled “Land & Sea,” to find out what happened Tuesday, August 24 at 8:00 p.m. ET/PT. Then be sure to sound off in the comments section about your favorite aspiring builders on Fox’s reality TV show and who you think has what it takes to join the winners list.

8:00 p.m. — “Previously on ‘Lego Masters!” In the eighth episode, siblings Bryan & Lauren were eliminated in the puppet show challenge just before making it into the Top 5. “It was the experience of a lifetime,” the siblings stated after their tearful elimination. “We wanted to bring imagination and joy and happiness to every one of our builds, and tell stories that would make people smile, and hopefully bring joy to a lot of families. So we hope we did that.” Meanwhile, brothers Mark & Steven won their second challenge thanks to their well-sculpted dragon puppet. Who will prevail tonight?

8:05 p.m. — Tonight “Lego Masters” hits a wall when Will tells the teams they will be split in half. Each member will create their own build (one creature that lives on land and another under the sea). Once separated they won’t receive any help from their teammate and a wall will divide them so they can’t even see each other. The Brickmasters stress that the creature must be “instantly recognizable” and their individual building strategy must “shine through.” They have five hours to finish their solo builds. The clock starts now!

8:15 p.m. — Caleb is a bit nervous about building his chameleon because his partner Jacob is more of the “creature specialist.” On the other side of the wall, Jacob is feeling pretty confident with his lobster. Down the aisle, Richard is building a penguin while his partner Dave builds coral. Mark is building a “massive jellyfish” and hopes to outdo his brother Steven’s giraffe. If they begin to feel nervous, Mark & Steven are still holding on to that golden brick for safety. Michelle is working on a rat for the last female team standing while her partner Natalie builds a jellyfish. Once she finds out Mark is also building a jellyfish, Natalie immediately wants to change direction and chooses an electric eel instead.

8:30 p.m. – Wayne is working on a crocodile for his land creature while Zack builds a lion fish. With less than two hours left in the build process, Dave begins to get nervous about his coral. Looking around the room, he realizes he has the only build without a face. The Brickmasters admit that the coral is difficult to recognize and they seem more impressed with Richard’s penguin. Time expires and as the builders wheel their creations over to be judged, Zack’s tail falls off his lion fish. Oh no! This could be a disaster. Then, Will announces a second part of this challenge. The teammates will now join forces to fuse their two animals together and make one fantastic, magical creature. They have five hours to create a world in which their builds live together. This is probably a life saver for Zack & Wayne.

8:45 p.m. — Dave & Richard pull apart their characters to combine them into one. Since the penguin is so much bigger than the coral, they’re using the coral to add a mohawk for an all new “Punk Rock Penguin.” Zack & Wayne are happy to see the scale of their builds are similar and they plan to combine their crocodile and lion fish into one scary beast. Caleb & Jacob go a similar route with their “Chameleobster.” Mark & Steven will have to place a giraffe head on a jellyfish because the scales of their builds are so different. The morale on this team is a little off, so I wouldn’t be surprised if they pull out that golden brick later tonight.

8:55 p.m. — Time has expired and the Top 5 teams will now be judged. Mark & Steven are feeling nervous, but choose to keep their golden brick. That means they are eligible to be eliminated. Next, Dave & Richard present “Poco Rocko in Seebee Geebees” to the judges. The punk rock penguin has great details to admire and the Brickmasters call it “super fun” but are conflicted because it isn’t a true mashup. It’s still just a penguin. Michelle & Natalie show off their “Rateelian in Goudapest” creation, which the Brickmasters call “imaginative” but the huge “gouda world” distracts from the creature. Zack & Wayne have built the “Lair of the Lioncroc,” which the Brickmasters call “terrifying” and a “beautiful marriage” of their creatures. Caleb & Jacob have built “Chameleobster in the Bricky Bog” and the Brickmasters praise this mashup and say these twins have “arrived” in the competition. Last up are Mark & Steven with their “Jelraffe in Kelp Savannah.” The Brickmasters say it looks a little too literal with a giraffe head on top of a jellyfish, but they like the aquatic world it lives in.

8:59 p.m. — It’s time to find out who has won this challenge and who will be eliminated. The Brickmasters deliberate and name Zack & Wayne and Caleb & Jacob the top two teams this week. The winners are Caleb & Jacob! The bottom two teams are Michelle & Natalie and Dave & Richard. The team eliminated on this ninth episode is Dave & Richard. These two dads are disappointed but proud of what they have accomplished as they exit “Lego Masters.”