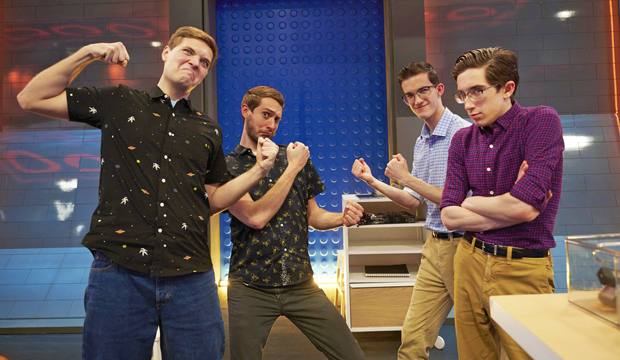 The second season of “Lego Masters” came down to three teams of brothers duking it out for the $100,000 grand prize: Mark & Steven, Caleb & Jacob and Zack & Wayne. Heading into the Season 2 finale, Zack & Wayne were at a slight disadvantage as they’d only won a single challenge throughout the competition, compared to two wins apiece for the other sets of bros. For their final challenge, host Will Arnett and Brickmaster judges Amy Corbett and Jamie Berard tasked the duos with creating a master build that appeared differently in the dark and in the light. So who won this epic battle of the brothers?

Below, read our minute-by-minute “Lego Masters” recap of Season 2, Episode 12, titled “Master Build – Day & Night,” to find out what happened Tuesday, September 14 at 8:00 p.m. ET/PT. Then be sure to sound off in the comments section about your favorite aspiring builders on Fox’s reality TV show and who you think has what it takes to join the winners list.

8:00 p.m. — “Previously on ‘Lego Masters!” In the 11th episode, friends Natalie & Michelle were eliminated when their childlike cardboard castle failed to impress the judges. Zack & Wayne’s Asian-inspired castle earned them a spot in the final three because it stretched out the longest horizontally. Caleb & Jacob soon joined them as the official winners of the challenge, as their collapsible drawbridge castle had the best aesthetics. Mark & Steven completed the final three thanks to their gem mine castle, complete with an angry dragon. Which of these three teams will wind up as the winners of “Lego Masters” Season 2? Let’s find out!

8:06 p.m. — The final three teams find out the last challenge of Season 2 will be to design, construct and blow the judges away with their own master build. They have 24 hours to create whatever they want! It just needs to be the greatest thing any of these sets of brothers have ever built. There is just one catch. They need to have a day look and a night look. It should look spectacular in the light, but wow the Brickmasters with a surprise when the lights go out. It should also be their biggest and best build yet. The 24 hour master build begins now!

8:15 p.m. — Caleb & Jacob feel they have been improving all season and are peaking just in time. Their confidence has increased with each challenge and Caleb is excited to use the prize money to start a new life with his fiancé. Zack & Wayne say their parents came to the United States to provide their family with a better opportunity. If these two win “Lego Masters” it will be the most exciting thing to happen in their family. With proper focus, Zack & Wayne think their technical skills are unrivaled. For this challenge they will have to focus on their storytelling. Mark & Steven have loved Legos since they were little kids and have never stopped playing with them. To win this competition would be the fulfillment of a lifetime. They will bring some of their best childhood memories to life in this final build.

8:22 p.m. — Three hours have passed and Zack & Wayne are the first duo to show concern. Their dragon is taking too much time to build and they consider making it smaller. The Brickmasters seem slightly concerned because Zack & Wayne have built a dragon before, but the brothers are adamant that this will be completely different. Caleb & Jacob have an instantly recognizable hourglass figure that their story will take place in. The only hiccup is that because they’ve already constructed the major structure, they are locked in on the scale of all the other elements of this build. Will announces that the winning structure will be displayed at Legoland Resort in Florida. Over at Mark & Steven’s station, they begin to feel the pressure because they’re using some new techniques they’re not familiar with, including how to create the appearance of water in their structure.

8:33 p.m. — Amy says the teams have to think very carefully about how they will show off a day and a night look. How will they use the lights and how will they incorporate them into their build? The title is up for grabs! To get the teams even more excited, Will allows each of them to talk to their families. It’s an emotional Zoom call for all, but Caleb completely breaks down when he sees his fiancé, Audrey. With added inspiration and full hearts, the teams get back to building their final masterpieces.

8:46 p.m. — There is just one hour left of this 24 hour challenge. The teams scramble to piece together any accessories that can accentuate their builds. Mark & Steven flirt with disaster when Steven trips over the cords for their lighting element. A cord rips off the power strip, but thankfully a total crisis was averted. The structure remains intact. Time finally expires and every team has placed their last brick. It’s time for the final judgment!

8:48 p.m. — Zack & Wayne are up first with “Pagoda of Our Lives.” It’s physically the largest structure of the three. There are four scenes with ninjas, a sushi restaurant, archery and family life. The top is fashioned in the style of a dragon’s gate and symbolizes the peak of this journey. There are two dragons, a black one and a white one, to reflect balance. For a night look, the inside lights up symbolizing how things look at night when you take time to sit back and look at things in a different light.

8:50 p.m. — Mark & Steven are next with their “Warden of the Woods.” It’s a 1,000 year old, 375 foot creature roams each forest, guarding it. Mark & Steven are in his hands after stumbling upon the warden. The night look includes a light in his staff and glowing yellow eyes. It also gives the appearance of flowing water under his feet.

8:51 p.m. — Caleb & Jacob are up last with their “Lands of Time.” It’s two distinct worlds, the world of day and the world of night, hanging in the balance of an hourglass. The day world shows everyday life and the night world shows bats and some brave explorers. At night the bats wake up and the day world lights up in the darkness.

8:59 p.m. — The Brickmasters have a lot to think about. They take some time to deliberate and come back with a decision. The team finishing in third place is Caleb & Jacob. The Brickmasters love that they see a world of possibilities with every challenge they face. The winners of the Lego Masters title, the Lego trophy and a $100,000 prize are Mark & Steven. The brothers burst into tears and are obviously thrilled. It’s difficult to see Zack & Wayne come so close and finish in second place, but they say they wouldn’t have traded this experience for the world. Mark & Steven say winning “Lego Masters” is an incredible validation and a crowning achievement. Congrats to Mark & Steven!