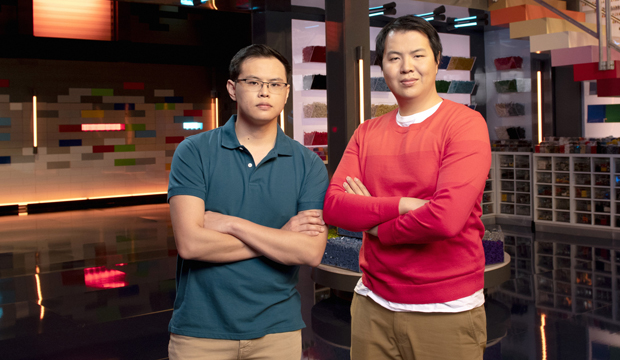 As the race to win “Lego Masters” Season 2 winds down, viewers are singling out brothers Zack & Wayne as their favorite team still in the competition. These sushi chefs from Stockton, CA have only won a single challenge so far (the introductory “LEGO Day Parade” comp), however our readers have named the lovable bros as the team who most deserves to take home the $100,000 prize and the “Lego Masters” trophy. It’s a close race, as there’s actually a tie for second place between two more sets of brothers, Caleb & Jacob and Mark & Steven.

Here are the complete poll results from our recent Top 5 poll:

The Top 5 teams were officially announced last week after brother-sister duo Bryan & Lauren were cut from the competition in sixth place. “It was the experience of a lifetime,” Bryan & Lauren said after their tearful elimination. “We wanted to bring imagination and joy and happiness to every one of our builds, and tell stories that would make people smile, and hopefully bring joy to a lot of families. So we hope we did that.”

The siblings were ousted because of their performance in the “Puppet Masters” episode that required the teams to build moveable puppets with fun personalities. Their creation was a cute dog named Hazel the Princess Pup, complete with a British accent and big eyes. Unfortunately, Brickmaster judges Amy Corbett and Jamie Berard thought Bryan & Lauren’s puppet lacked movement and was too blocky.

Also in the bottom this week, but safe, were Michelle & Natalie with their singing grandmother creation named Betty Bricks. The friends’ build was too heavy and its arm broke off midway through the puppet show, leaving the judges wanting more. They were ultimately saved by the judges, just barely squeaking into the Top 5.

Do you agree that Zack & Wayne should be the ones to win Fox’s reality TV show? Here’s a reminder of the track records for each of the final five teams on “Lego Masters” Season 2: