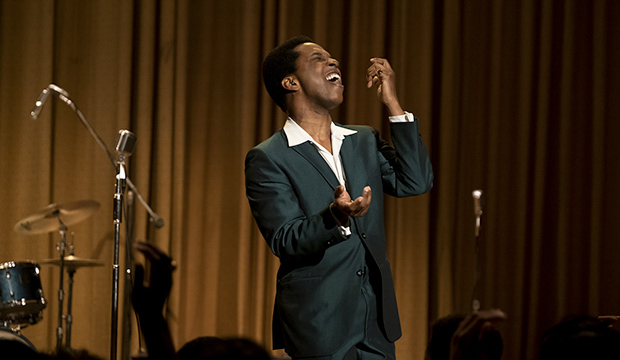 Leslie Odom Jr. was more than a bit uncomfortable during a recent Zoom conversation with the Wrap’s Sharon Waxman as she ticked off all of his accomplishments including a Tony for his performance as Aaron Burr in ‘Hamilton,” a Grammy for “Hamilton” and now two Oscar nominations for Regina King‘s “One Night in Miami.” He contends in both Best Supporting Actor for his portrayal of the legendary singer Sam Cooke and Best Original Song (with Sam Ashworth) for “Speak Now.” “I wish I could have been off camera for that,” he admitted with a smile.

He characterizes Kemp Powers‘ reimagining of a historical meeting in 1964 in a Miami between Cooke, Malcolm X, Jim Brown and Muhammad Ali (then known as Cassius Clay) to be a “wonderful beginning in a lot of ways.” As he explained: “Film is so new to me and it’s such a very public way to learn. I envy people that understand it right away, that understand the storytelling and the form right away. I don’t think I did, coming from theater. Theater is much more natural to me, a much more natural fit. So, it’s just been a process of learning in a very public way. Not all of my films I’ve done have been well-received. I haven’t been well-received in all of them. So, anyway, this obviously feels like a wonderful place to start from. It just feels that I can build from here.”

In “One Night in Miami” all four men are at the critical turning points in their lives: Malcolm X’s relationship with the Black Muslims is tenuous; Clay is about to become a Muslim and NFL legend Brown is hoping to break into movies. Though Cooke is a successful R&B singer he has doubts about his career path. And it’s Malcolm X who is calls out Cooke for his lack of political message is his songs. Malcolm X, said Odom, is “a manifestation of Sam’s insecurities.”

As for playing the singer known for such hits as “You Send Me” and “Twistin’ the Night Away,” Odom Jr. noted that the “more I invested in Sam’s rightness, the more I invested in his belief he was doing what was right, the more I took in the rhythms and the passages of text that Kemp had gifted me with, the better I could contribute to the dynamic in the room. The more I could offer to the film’s tensions. All I had to do was learn that text and believe in it and it was easy to do because I was so closely aligned [to it].”

Odom, who performs Cooke’s songs in the movie, admits “I’m desperately looking for a way in, I’m looking for the open door which is going to lead me to which door is opening that’s to lead me to the greatest bounty to pull from and with Sam, music was the way into Sam.” During the film, “there are a couple of needle drops and you hear me as Sam. I started the process of this movie recording those things. So, I got to go crawl into the original Cooke recordings and do my best. The singing voice in a lot of ways, it’s like a deep psychological profile. The voice tells you so much about where a person is from geographically, what worlds they grew up in and who they might be listening to.”

Until he did the movie, Odom didn’t know how sensual Cooke was. “Studying the timeline of his recordings and going back to that gospel stuff I was like ‘ah-ha.’ I understand why these teenager girls were falling out in the aisles of his gospel shows. Aretha Franklin fell in love with Sam as a teenage girl.” Odom noted that it wasn’t just because he was handsome and a great singer. “There was a sensuality Sam laid down in these songs. There was a confidence he found in that. He understood his power and not for nothing it connected spiritually and sensually.  You know what I mean?”

Odom recalled King requested four new songs because she wanted to have a choice. “It’s a big moment for Regina as director, her directorial debut, and she didn’t want me to just bring her the song and say, ‘Here it is.’ Looking back on it, it was a really good exercise for me because obviously the film is personal to me. There was a lot riding on it for me.” He found less pressure writing four song instead of just one. “No one song felt to me like this has to got to be the one. I like them all and I knew if given the chance anyone of them with edits and a little bit of time, could be made special.”