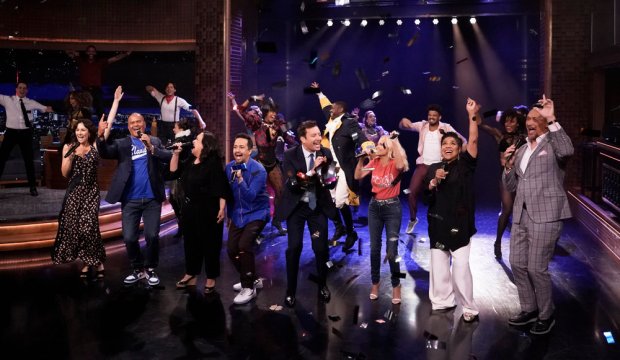 Few industries have been more fully shut down by the pandemic than the performing arts. Broadway has been dark for well over a year. But there’s a light at the end of the tunnel, and the Great White Way is preparing for its return in September. To build hype for Broadway’s resurrection, Jimmy Fallon teamed up with one of Broadway’s most prominent emissaries, “Hamilton” and “In the Heights” creator Lin-Manuel Miranda, for a rousing musical number on Tuesday’s “Tonight Show.”

The bit started with an original song called “Broadway’s Back,” celebrating all the things they missed about Broadway, even “drinking wine out of a sippy cup” and paying $20 for a snack, and paying homage to some of Broadway’s biggest musicals, including “Chicago,” “Dear Evan Hansen,” “West Side Story,” “The Lion King,” “Book Of Mormon,” “Wicked,” and of course  “Hamilton,” among many more.

Then they transitioned into a reworked version of the “Hamilton” song “You’ll Be Back” (which Fallon sang on “The Hamilton Mixtape”), joined by Broadway stars Phylicia Rashad, Kristin Chenoweth, Laura Benanti, and Christopher Jackson, along with “In the Heights” movie stars Olga Merediz and Jimmy Smits and a fleet of backup dancers letting loose after 15 months on ice. It’s a really sweet tribute to the power of live performance, underscored by the full-capacity in-studio audience inside Studio 6B.

The Oscars will talk about 'Bruno' after all