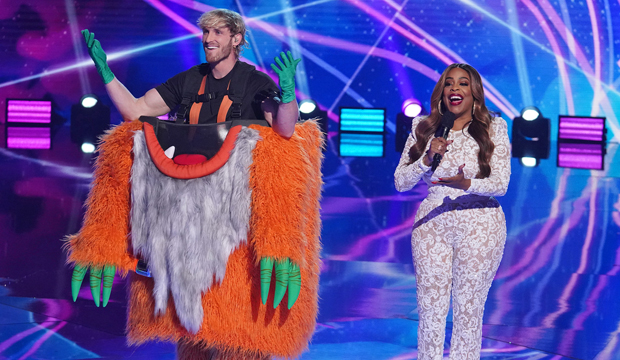 Hollywood’s freakiest costume party got a little smaller on Wednesday night’s episode of “The Masked Singer,” when Grandpa Monster was sent packing after rocking out to “Bad Reputation” by Joan Jett. The orange, furry beast was revealed to be internet personality, podcaster and boxer Logan Paul. Nobody was more crushed by his reveal than panelist Nicole Scherzinger, who guessed Grandpa Monster was Logan’s brother, Jake Paul.

“You thought I was Jake?” a sad-faced Logan asked the Pussycat Doll during his unmasked interview with guest host Niecy Nash. Despite the social media star’s early exit, he did enjoy his brief stint as an entertainer. “Singing is so scary for me and being in this costume, ironically, as restrictive as it is, you feel so free in here and it was a lot of fun,” Logan revealed. “I’m going to be honest guys, I never stood a chance. I’m a YouTubing, boxing, Pokémon collector. Thanks for having me on the show. I had a lot of fun. Good luck Black Swan, I want her to win. She’s very good!”

Although Nicole came close to nailing Grandpa Monster’s identity, her fellow panelists were way off the mark. Robin Thicke guessed the disguised singer was professional football player Johnny Manziel. Ken Jeong went a completely different direction with comedian Kevin Hart. And Jenny McCarthy had the right idea going with a fighter, but was still wrong with her pick of The Miz.

Throughout the episodes Grandpa Monster performed, various clue packages hinted to Logan’s identity. The “6” in Grandpa Monster’s package was a clue to the social media platform Vine, where Logan rose to fame making six second videos. The boxer dog in his clue package hints to Logan’s boxing career and upcoming fight vs. Floyd Mayweather.

Logan was the second celebrity unmasked from Group B and the fourth overall. He was preceded by Kermit the Frog as the Snail, Caitlyn Jenner as the Phoenix and Danny Trejo as the Raccoon. Moving forward from Group B are Black Swan, Chameleon, Piglet and the newly introduced wildcard, Crab. Did you guess Logan was hiding behind the Grandpa Monster mask?