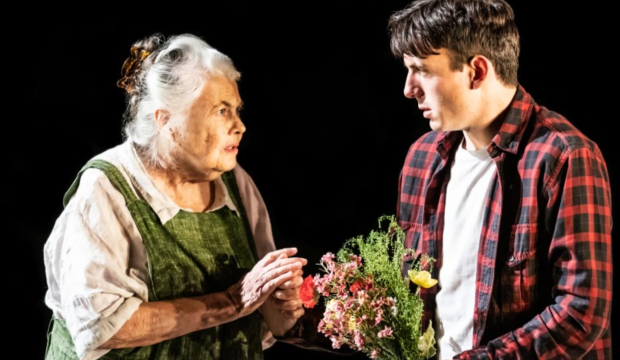 As predicted, Lois Smith won the Tony Award for Featured Actress in a Play for her moving turn in Matthew Lopez’s “The Inheritance.” Not only is this the veteran actress’ first career Tony win, but Smith has just become the oldest Tony winning actor in history. Talk about a victory being worth the wait!

Lois Smith is 90 years of age, having been born on November 3, 1930. This makes her two years older than the previous record holder for oldest Tony winning performer. That would be Cicely Tyson, who won a Tony for playing Carrie Watts in the 2018 revival of “The Trip To Bountiful” at age 88. That was Tyson’s only Tony nomination and win of her career, despite appearing in nine Broadway plays. Ironically, Smith also portrayed Carrie in a 2005 Off-Broadway revival of “Bountiful.” She won the Drama Desk, Lucille Lortel, Obie, and Outer Critics Circle Awards for that performance.

Smith has two prior Tony nominations, both in the Featured Actress (Play) category. One for “Grapes of Wrath” in 1990 and another for “Buried Child” in 1996. Between “Buried Child” and “The Inheritance,” Smith focused on Off-Broadway stage appearances, as well as film and television. So “The Inheritance” marked her return to Broadway.

“The Inheritance,” is a nearly seven hour experience split into two parts. Smith did not appear until Part 2, but the revered actress made the most of her small , but pivotal, role. She played Margaret, the caretaker of a house that once served as a safe haven to gay men during the AIDS epidemic. Smith is gifted with a gargantuan, heartfelt monologue shortly after her entrance, which details the emotional history of her character and the men whom she nursed in their final days.

Smith has cultivated an impressive acting career that has spanned eight decades. She made her Broadway debut in “Time Out For Ginger” in 1952. Other Broadway appearances include “Orpheus Descending,” “Edwin Booth,” and a revival of “The Iceman Cometh” with James Earl Jones. She made her film debut in “East of Eden,” and appeared in dozens of other films such as “Five Easy Pieces,” “Fried Green Tomatoes,” “Twister,” “The Laramie Project,” “Lady Bird,” and “Uncle Frank.” Her performance in the film “Marjorie Prime” (a role she also portrayed in the stage play Off-Broadway) earned her a Satellite Award, as well as Gotham and Independent Spirit nominations. She is a Critics Choice nominee for her guest role on “The Americans.” Smith was inducted into the American Theatre Hall of Fame in 2007.

2022 Tony Awards: Every winner (and nominee) in all 26 competitive categories

How often do the Tony Awards for Best Musical and Best Score split?