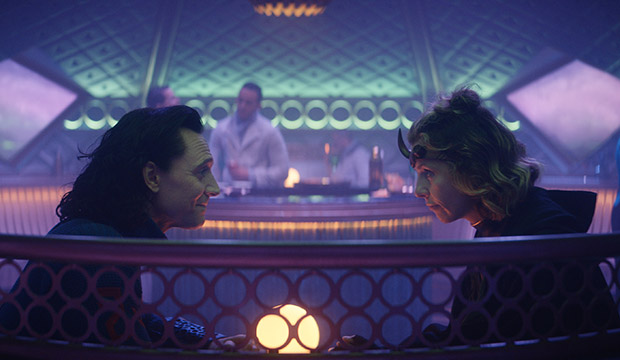 We’re halfway through the first season of “Loki,” and if there is one word to describe this new adventure through time and space, it’s “wordy.” It makes sense that a show about Loki (Tom Hiddleston) would involve a lot more talking than outright action — despite the fights and the battles he’s taken part in during his tenure in the Marvel Cinematic Universe, Loki has always been better at wielding words instead of weapons. It’s what makes him such a dangerous threat — well, besides all of the magic — because most people don’t know how to arm themselves against a person skilled at manipulation through communication.

Loki’s preference to outsmart people with his mind and his words rather than in a physical fight is apparent in this week’s episode, which sees Loki and the Variant (Sophia Di Martino), who is now going by Sylvie, become trapped on Lamentis-1, a moon destined to be destroyed by its planet in the year 2077 (and which also gives the episode title its name). The plot of the episode is pretty contrived though: After Loki thwarts Sylvie’s attempt to destroy the Time Keepers, they’re attacked by Judge Ravonna Renslayer (Gugu Mbatha-Raw), so Loki sends them to Lamentis-1 to escape. However, the time pad that allows them to travel through time and space has run out of battery and they can’t extricate themselves from this particularly dire situation. So, Loki and Sylvie are trapped in an apocalypse because someone forgot to recharge their time machine. Again, it’s very, very contrived. But it’s also the perfect setup to force Loki and Sylvie to talk to one another and reveal things about themselves (that the other can later use as a weapon).

SEE ‘Loki’ introduces us to the Loki variant, but who is she?

After tricking their way onto a train destined for a ship, where Loki gets drunk and sings, that will supposedly take them off the doomed moon, Loki opens up about his mother, Frigga (Rene Russo), who taught him how to use magic. She has not yet died in his timeline but he now knows she’s destined to die indirectly by his own hand, so this trip down memory lane is a relatively sweet and vulnerable moment, especially when you remember that this version of Loki has only recently learned he was adopted. But this is also the type of information that could be used against Loki later. Because as Sylvie eventually reveals in her own bit of oversharing, she needs to be able to insert herself into someone’s memories to enchant them if their mind is too strong and she can’t easily overtake them. And Loki’s is definitely a mind she can’t penetrate yet — we see her try to enchant him to no avail early in the episode. So both have now revealed something about themselves, be it a vulnerability or how their unique power works. It feels like it’s only a matter of time before this comes back to bite them both in the ass.

But there is one other piece of information that’s revealed (and done so rather awkwardly) during these conversations as well. While Sylvie explains how her enchantment powers work, she mentions she had to insert herself in a really old memory of Hunter C-20 (Sasha Lane) prior to her ever working for the TVA. When Loki questions this, Sylvie reveals that all of the people working for the TVA are actually variants themselves and were not created by the organization as we (and Loki) were led to believe. This is clearly a bomb that will eventually go off and play a major role in the narrative — how will Mobius (Owen Wilson), who was absent this week, react to this news? — but it has little meaning in the present since Loki’s memories are intact and he knows he’s a variant.

While the goal of this episode was clearly to get these two characters to open up and expose themselves, it’s still not entirely clear if Sylvie is supposed to be Lady Loki or Enchantress. There are multiple instances in which she again rebuffs any talk of her being a Loki variant, but she also reveals she always knew she was adopted. While it would be pretty cool if Sylvie turned out to be Enchantress, it would probably be more interesting if she were Lady Loki since the point of the show is to investigate Loki’s struggle with his identity. At one point Sylvie actually asks him what makes a Loki a Loki. It’s the question of the hour, and even though we all have a good idea at this point, Loki remains a work in progress.

Right now he doesn’t quite seem like the man who just tried to take over Earth via an alien invasion — he shows compassion for innocent people at the end of the episode, as more and more meteors crash down upon the “Blade Runner”-esque city. He hasn’t really earned that kind of character development yet, but this could potentially speak to Loki’s eternal placement as being between a hero and a villain. After all, he’s pretty fluid in every aspect of his life, as he also confirms he’s bisexual in the episode. Still, it’s hard to come away from “Lamentis” feeling like much has been accomplished. While we learned a bit more about Sylvie’s enchantment abilities and the visuals and score continue to create a distinct feel that separates “Loki” from the rest of the MCU, the show would greatly benefit from a bit more movement on the narrative front next week, especially since the episode stops abruptly, just short of the apocalypse. It’s honestly a bit underwhelming and leaves the episode feeling unfinished rather than like we’re being left on a cliffhanger. Hopefully Mobius will return next week and make the show feel balanced once more.

New episodes of “Loki” are released Wednesdays on Disney+.