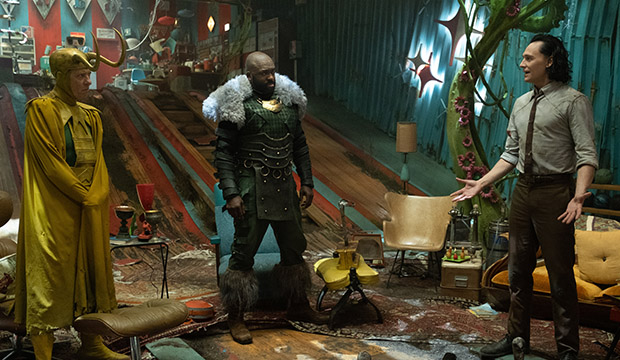 After scoring 23 nominations, the critically beloved and fan-favorite series “WandaVision” underperformed at the Emmys despite Paul Bettany running an excellent Instagram campaign. However, there is hope for another Marvel series at the Screen Actors Guild Awards, where “WandaVision” is ineligible after meeting last cycle’s extended deadline. “Loki,” which brought back Tom Hiddleston as everyone’s favorite God of Mischief, aired this past summer on Disney+ and ultimately changed the course of the Marvel Cinematic Universe in six fun but ultimately undervalued episodes. This raises the question: Is the show strong enough to earn the series a drama ensemble nomination?

“Loki,” which introduces the multiverse via a storyline involving the Time Variance Authority and comic book baddie Kang the Conqueror (Jonathan Majors), is sitting just outside the top five in sixth place in Gold Derby’s combined odds for TV drama ensemble. HBO’s “Succession,” which returns for its highly anticipated, pandemic-delayed third season on Sunday, Oct. 17, currently leads the way with 16/5 odds and four Experts predicting it to win. It’s followed by Hulu’s “The Handmaid’s Tale,” which was an even bigger loser than “WandaVision” at the Emmys, going 0-21, but has been nominated for ensemble at the SAG Awards every season thus far. Apple TV+’s ”The Morning Show,” FX’s “Pose” and NBC’s two-time ensemble drama winner “This Is Us” round out the top five.

SEE ‘Loki’ finale introduces Kang the Conqueror — what does this mean for the MCU and Season 2?

It’s a lineup of familiar, awards-friendly shows, which doesn’t bode well for “Loki” upon first glance. But three of the five are also seeking their first SAG ensemble noms; “Succession,” “The Morning Show” and “Pose” have yet to be recognized. And while “Succession” has fully broken out since the last time it was eligible — it took home the Best Drama Emmy in 2020 alongside a Best Drama Actor win for Jeremy Strong and a slew of acting nominations for the rest of the cast — breaking into the ensemble drama race may less certain for “The Morning Show” and “Pose.” The former nabbed three individual bids and a win for Jennifer Aniston during its first season, but it inexplicably failed to earn an ensemble nomination and is no longer Apple TV+’s biggest show or top awards magnet (hi, “Ted Lasso”). Still, it likely has a better shot than “Pose,” which has never once been nominated in any category at the SAG Awards. Though the open field and the fact that this is its final season of eligibility could play a factor.

Working in “Loki’s” favor this year though is the fact that “This Is Us” hasn’t been nominated in the category since it won back to back in 2018 and 2019. It feels like a placeholder show at this point, which gives “Loki” — buoyed by the natural charm of Hiddleston and strong performances from Majors, Owen Wilson and Sophia Di Martino — a chance to quietly sneak in. Plus, what sits behind “Loki” in Gold Derby’s current odds is unproven, which means there isn’t much immediate competition for any open slots. The back half of the top 10 features four shows that haven’t yet aired: “Dexter: New Blood” (eighth place), “Severance” (eighth), “The Wheel of Time” (ninth) and “Hawkeye” (10th). “Dexter” was nominated four times during its original run, so we cannot count it out even if this new iteration feels rather superfluous. But the quality and potential of the other three series is less obvious, and “Loki” is much more familiar to voters, which is helpful with a populist body like the SAG Awards.

Of course, it’s possible “Hawkeye,” which stars Jeremy Renner and debuts in late November, could steal votes from “Loki” if voters aren’t willing to nominate two Marvel series (“The Falcon and The Winter Soldier” isn’t seen as a contender, down in 13th place, despite being eligible). It will be the most recent Marvel series to air by the time voting opens in early December. But it’s too soon to tell how that particular battle might play out. Because again, it’s only mid-October. There is still plenty of time for the race to evolve and take shape as we get closer to the voting period. However, it’s already quite clear this drama ensemble category is going to be top-heavy with one (or two!) slots potentially up for grabs. And right now there’s no reason to believe that “Loki,” which is a fun series about a fan-favorite character played by an effortlessly charming lead, can’t trade places with one of the other shows in the top five in the coming weeks or months.