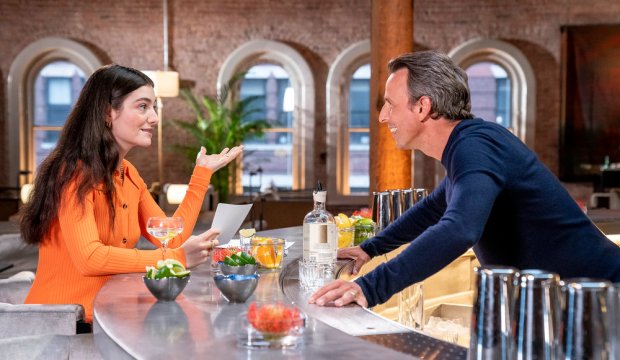 It’s been a while since Seth Meyers was able to do a “Day Drinking” segment, where the “Late Night” host and a celebrity go to a bar and get tipsy together. So it should come as no surprise that Meyers went hard when he linked up with singer Lorde on Wednesday’s show. He had a lot of pent-up camaraderies to get out.

The first thing Meyers did for the “Solar Power” singer was to serve her drinks inspired by her songs. A nice idea, except the drinks were pretty disgusting. The “Solar Power” was meant to wake the drinker up, like sunlight, and consisted of iced coffee, Red Bull, espresso beans, and Four Loko. And actually, it wasn’t that bad. Who would’ve thought? And “Ribs,” named after one of the Kiwi singer’s early hits, had a base of gin and a pork rib garnish.

Then they played a drinking game where Lorde said some New Zealand slang words and Meyers had to guess what they meant. Meyers correctly deduced that “wop wops” means “middle of nowhere,” which was pretty impressive. And then he quizzed her on some New England slang terms. She didn’t know what a “30 rack” was.

Meyers forgot to mention while introducing the game “Royals” that it was based on her song “Royals,” but we all got that, right? It’s her most famous song. Lorde got easy ones, like Queen Elizabeth and Prince Rogers Nelson, while Meyers had to take even more shots after failing to guess King Egbert.

They ended with Meyers drunkenly trying to sing along to her best song, “Green Light,” much to Lorde’s embarrassment.

If there’s one thing you’ll be able to take away from this segment, it’s that Lorde’s full name is Ella Marija Lani Yelich-O’Connor.

TV Hall of Fame: David Letterman tops our list of 50 most worthy inductees