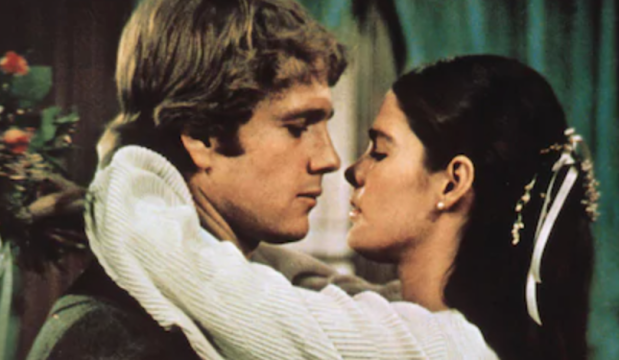 “What can you say about a 25-year-old girl who died? That she was beautiful and brilliant? That she loved Mozart and Bach, the Beatles, and me?”- Oliver Barrett IV, “Love Story.”

It’s hard to explain to non-boomers just what a phenomenon the 1970 four-hankie weepie “Love Story” was. It was huge.  And yes dear reader, at 15 I was caught up in the tsunami of “Love Story.” I devoured Erich Segal’s novel. And I remember a friend I was visiting spent the entire time reading her favorite passages from the book.

When I saw the movie at the Cooper Theatre in Denver, the day after it was released, there wasn’t a dry eye in the house as this sentimental romance between the poor, feisty, salty-mouthed Radcliffe student Jennifer Cavelleri (Ali McGraw) and handsome rich hockey star college student Oliver Barrett IV (Ryan O’Neal) unspooled. Of course, like any good tearjerker she ends up dying.  And everyone waited with bated breath in the darkened theater for Jenny’s famous line “love means never having to say you’re sorry.”

I have to admit I still don’t know what that means.

Repeat business was strong. It played in some theaters for over six months and grossed more than $100 million dollars (adjusted for inflation, it remains in the top 50 money-makers of all time). The soundtrack album of Francis Lai’s gorgeous score was a huge hit. So were the posters. O’Neal, who came to fame in the 1960’s on ABC’s “Peyton Place,” was the sex symbol de jour. And former model MacGraw, who had made a big splash in the 1969 comedy “Goodbye Columbus,” became a fashion icon especially for the knit cap she wore in the film.

The film was nominated for seven Oscars including Best Picture, director for Arthur Hiller, actor and actress for O’Neal and MacGraw, supporting actor for John Marley, who played Jenny’s warm farther, Lai’s score and Segal’s original screenplay. (Segal had written the novel based on his screenplay which was published in Feb. 1970).

But competition for Oscars was fierce with the top-notch bio-pic “Patton” the big winner at the 43rd annual Oscars on April 15, 1971. “Patton” won seven Academy Awards including Best Picture, director for Franklin Schaffner and George C. Scott for Best Actor, which he refused. Best Actress went to Glenda Jackson for “Women in Love.” John Mills received Best Supporting Actor for “Ryan’s Daughter” and Supporting Actress went to veteran Helen Hayes for “Airport.”

The only Oscar “Love Story” won was for Lai’s score.  The late Lai told me for a 2001 L.A. Times piece on the film that he had turned initially turned down the assignment, for many reasons including the fact he would have to fly from Paris to Los Angeles and he hated planes. “I was already working on a Claude Lelouch film and finally, summer vacations were approaching, and I wanted to spend time with my family.” It was his friend Alain Delon, who was visiting Robert Evans, the Paramount Studio executive and MacGraw’s husband in La La Land, who called and insisted he watch the movie. A screening was set up in Paris. “I came out of the screening incredibly moved. I went straight home, sat at my keyboard and wrote that theme that very night.”

“Love Story” is still popular. A few years back, O’Neal, 79, and MacGraw, 81, did a successful tour of A.R. Gurney’s ‘Love Story.” On Feb. 12, they received their stars on the Hollywood Walk of Fame. And Paramount Pictures Home Entertainment recently released a special Blu-ray of the movie newly restored from a 4K film transfer.

The late Segal talked about why “Love Story” struck such a chord with me in 2001. He noted the film was released during the height of the Vietnam War and “a lot of ‘Monday morning quarterbacks’ have posited a cause-and-effect relationship between the brutalities of the Vietnam War as begetting the sentimentality of ‘Love Story.’ If this is all accurate, it was subconscious on my part. I know it proved to be a balm for agonized American psyches, but I take no credit for it. I was not prescient; I was just lucky enough to be in right place at the right time.”

“I just think it hit at the right time,” the late Hiller told me in 2001.  “I think people were ready for saying that two people can just get along for love alone-that they can understand each other. I am sure Erich didn’t say in his mind, ‘This is the time to write this,’ but he was obviously feeling it. We were all feeling it.”