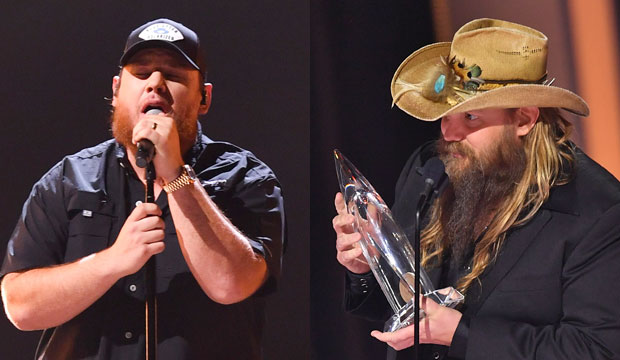 The 55th Annual Country Music Association Awards held on November 10 ended with another surprise for Entertainer of the Year: Luke Combs won for the first time on just his second try, which comes after Eric Church pulled off an upset in that category in 2020. It was a counterintuitive result considering that Chris Stapleton had just swept all four of his other categories, including Male Vocalist of the Year, where he beat Combs. And it meant Carrie Underwood and Miranda Lambert have to wait at least one more year for the title. Check out the complete list of winners here.

Stapleton was ultimately the night’s biggest winner, claiming Album of the Year for “Starting Over” and Single of the Year and Song of the Year for the title track, in addition to his aforementioned Male Vocalist victory. You’d think that would make a strong case for him to be considered Entertainer of the Year, but the CMA Awards often have inconsistent tendencies in that category. Church won Entertainer last year despite having only one other nomination (Male Vocalist, which he lost to Combs). This year Church had five nominations including Album of the Year (“Heart”), but this time Combs was the top entertainer. And 2021 CMAs host Luke Bryan has won Entertainer of the Year twice before without a single victory in any other category.

Yet the CMAs calculus hasn’t helped female artists. This year Lambert was nominated for the fifth time, but still has never won. Underwood was nominated for the fourth time and is also still awaiting her first victory. Over the past 15 years the two women have racked up a combined 21 CMA victories, but never in the top category. It’s been a decade since any woman claimed Entertainer of the Year: Taylor Swift in 2011. The only other women to win in the 21st century were The Chicks in 2000.

Ultimately only three women won awards in any category on Wednesday: Kelsea Ballerini for “Half of My Hometown” (Musical Event of the Year and Music Video of the Year), fiddler Jenee Fleenor (Musician of the Year), and Carly Pearce (Female Vocalist of the Year). The only one of those that was presented during the prime time telecast was Pearce’s. Though maybe Jennifer Hudson will get some write-in votes next year after her barn-burner performance of “Night Life” and “You Are My Sunshine” in honor of Aretha Franklin.