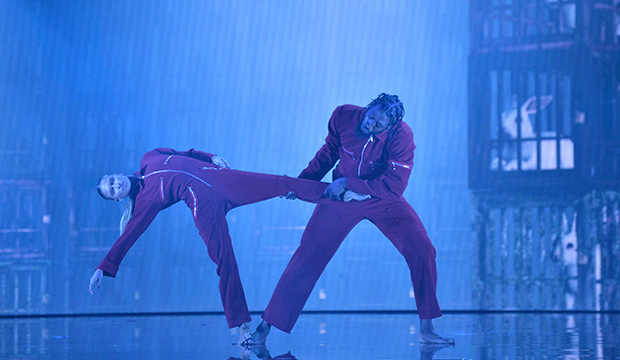 Iman Shumpert and Daniella Karagach were a, uh, cut above the rest on Monday’s “Dancing with the Stars'” Horror Night with their “Us”-inspired routine, and don’t think Red herself did not notice.

“THIS IS FIRE, @imanshumpert & @DKaragach!!!” Lupita Nyong’o tweeted Tuesday with a video of their dance along with a trio of fire emojis and the hashtags #RedIsUntethered and #WatchYourself.

Later Tuesday night, in a reply to Karagach’s tweet, Nyong’o wrote, “Putting it out there that I’m so down to try and learn this choreography someday,” to which the pro replied, “ANY DAY ANY TIMEEE.”

The NBA champ and Karagrach scored a perfect 40 for their contemporary routine, for which they donned those iconic red jumpsuits to play the Tethered, grasping scissors and all, set to the Tethered remix of “I Got 5 on It” by Luniz and Michael Marshall. The scintillatingly sinister dance captured the spirit of the Jordan Peele film and was loaded with the couple’s now trademark daredevil lifts that make great use of Shumpert’s towering height. They are only the second couple of the season to earn a perfect score, following JoJo Siwa and Jenna Johnson, who received their second 40 on Monday for their “It”-inspired jazz.

“Holy cow! That was genius! You transported us to another world. My mind was blown. It was sheer perfection. The way you guys matched and danced as one, it was like — yes!” Carrie Ann Inaba remarked.

Derek Hough, who performed himself on Horror Night, jumped onto the judges’ table before bestowing praise. ““I’m speechless,” he said. “The thing is, there’s moments on the show — we’ve said this before — that was something that people will watch over and over and over again.”

It’s true. And it’s really not hyperbolic to say right now that this routine will go down as one of the best in “Dancing” history. Not only was it creative and executed to perfection, but it also showcased how much Shumpert has improved. Basketball players don’t have a great track record on “Dancing,” usually doomed by their height and height difference between them and their partners, but Karagach has not just made Shumpert into a (budding) dancer who also has characterization down pat but has turned what could’ve been a disadvantage into an advantage. If they keep this up, don’t be surprised if they win it all. They definitely have Nyong’o’s vote.