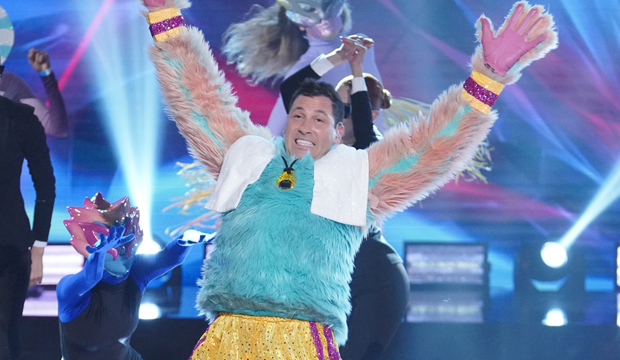 Reality TV dancing competitions collided during Wednesday night’s finale of “The Masked Dancer,” when “Dancing With the Stars” pro Maksim Chmerkovskiy was revealed to be the Season 1 runner-up, Sloth. The sluggish, blue creature came up short in his quest to wrap his claws around the Diamond Mask trophy, losing to gymnast Gabby Douglas as Cotton Candy following his final jive to “Ballroom Blitz” by the Struts.

SEE Paula Abdul ends ‘The Masked Dancer’ as judge with most correct guesses — how’d she do it?

“It was absolutely the best experience,” Max revealed in his unmasked interview with host Craig Robinson. “Sloth is my alter ego now. It’s unlike anything that I’ve ever experienced.” When asked why there was a stethoscope in one of his clue packages, Max responded, “I had an arc on ‘General Hospital.’ And I also just wanted to mess with Ken.” And as for his “Glee” toothpaste clue? “I was fortunate to dance with [‘Glee’ cast member] Heather Morris on ‘Dancing With the Stars.'”

Panelists Paula Abdul and Brian Austin Green were both clever enough to name Max as the Sloth before he pulled his mask off. Ken Jeong thought it was “Magic Mike” heartthrob Channing Tatum and Ashley Tisdale guessed Golden Globe winner Hugh Jackman. Paula was the top guesser among the panelists for Season 1, with four correct guesses total.

Helping Paula and Brian correctly name Max as the Sloth were some very helpful hints in his clue packages. The blue and yellow beakers in Max’s package were a nod to the colors of the Ukrainian flag, Max’s homeland. The amber in Sloth’s package was a nod to Max’s dance partner Amber Rose on “Dancing With the Stars.” The word clue “Broadway” referred to Max starring in the Broadway dance productions “Burn the Floor” and “Forever Tango.”

Max defeated eight other celebrities before losing the Diamond Mask trophy to Gabby Douglas as Cotton Candy: Ice-T as the Disco Ball, Bill Nye as the Ice Cube, Elizabeth Smart as the Moth, Brian McKnight as the Cricket, Vinny Guadagnino as the Hammerhead, Jordin Sparks as the Exotic Bird, Oscar De La Hoya as the Zebra and Mackenzie Ziegler as the Tulip. Did you guess the “Dancing With the Stars” pro was dancing inside the Sloth costume?