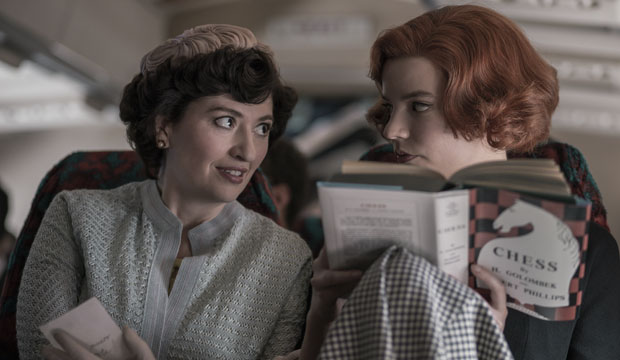 Marielle Heller has been acting for years, but lately she’s better known for directing films like “Can You Ever Forgive Me?” (2018) and “A Beautiful Day in the Neighborhood” (2019). In that capacity she has directed a few Golden Globe-nominated performances. But now she could get a Golden Globe acting nom of her own for “The Queen’s Gambit.”

Start a lively discussion in our famous forums now!
Speak up! Every day more than 5,000 Hollywood execs and superstars track our forums for the latest awards buzz. Do you have a smart topic to suggest?
Reply
Explore our lively forum discussions

Heller co-stars in the Netflix limited series as Alma Wheatley, a lonely woman in a loveless marriage who adopts an orphan girl (Anya Taylor-Joy) who turns out to be a chess prodigy. Despite Alma’s personal struggles, she supports her daughter as she travels to tournaments and quickly advances her competitive career. It’s a warm, empathetic performance in a series full of steely-eyed chess strategists, so she gives the audience a crucial entry point into this world.

She has already been nominated for Best Movie/Limited Supporting Actress at the Critics’ Choice Awards for this performance, but the Globes are a tougher nut to crack. While Critics’ Choice has separate categories for drama, comedy, and movie/limited performers, the Golden Globes combine supporting actress from all genres into one category with just five nomination slots up for grabs. So she’s not just up against cast members from “Mrs. America,” “Fargo” and “Small Axe,” but also “The Crown,” “Ozark,” “Schitt’s Creek,” “Ted Lasso” and many more jockeying for the limited number of bids.

Nevertheless, Heller directed Melissa McCarthy and Richard E. Grant (“Forgive Me”) and Tom Hanks (“Beautiful Day”) to Globe nominations. She even directed an episode of “Transparent” from season two, for which Jeffrey Tambor and Judith Light received Globe noms. So the Hollywood Foreign Press Association might want to finally extend an invitation to her as well.

Based on the combined predictions of Gold Derby users as of this writing, Heller is on the bubble for a nom with 16/1 odds. Six of the Expert journalists we’ve surveyed are currently betting on her to break through: Thelma Adams (Gold Derby), Joyce Eng (Gold Derby), Nikki Novak (Fandango), Jazz Tangcay (Variety), Kaitlin Thomas (Gold Derby) and Ben Travers (IndieWire). Do you agree with them?