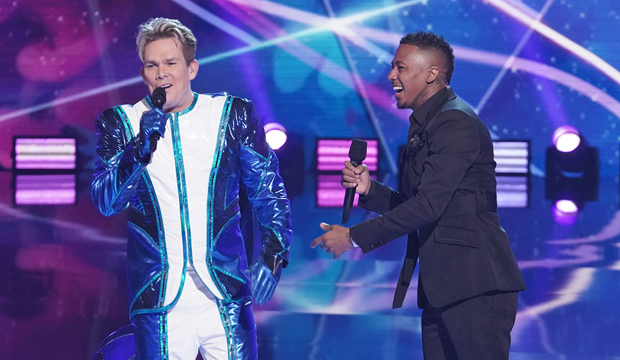 The Group A finals concluded on Wednesday night’s episode of “The Masked Singer” with singer-songwriter Mark McGrath being unmasked as the Orca. The crooning sea creature made his debut in Episode 3, becoming the first wild card contestant in the history of the series and bumping the Racoon (Danny Trejo) out of the competition. Mark’s swan song was “Every Rose Has Its Thorn” by Poison.

Panelists Robin Thicke, Jenny McCarthy, Ken Jeong and Nicole Scherzinger were perplexed by the singing killer whale and none of them were able to identify the Sugar Ray frontman. Robin and Ken both thought Green Day singer Billie Jo Armstrong was behind the mask. Nicole guessed another rocker, Dave Grohl of the Foo Fighters. Jenny went a completely different direction, guessing professional surfer Kelly Slater.

SEERobin Thicke (‘The Masked Singer’) tears up remembering late father Alan Thicke: ‘He was my hero’

Mark was honored to be mistaken for various rock icons throughout his brief stint on the Fox reality TV series. “Can I just say one thing?” he asked host Nick Cannon during his unmasked interview. “Dave Grohl? Bon Jovi? My head is still as big as Orca is right now!” Robin then applauded Mark once again, responding, “You came out kicking butt man.”

Mark became emotional throughout the episode, stating, “That was for my pops,” before revealing a clue that he had 10-year old twins of his own. Following his unmasking, he said in his farewell, “My kids are going to get to see this and they have no idea. I love you guys. Thank you so much!”

Next week “The Masked Singer” will continue with the Super 8: Black Swan, Chameleon, Crab, Piglet, Robopine, Russian Dolls, Seashell and Yeti. Six celebrities from Season 5 have been unmasked to date: Kermit the Frog as the Snail, Caitlyn Jenner as the Phoenix, Danny Trejo as the Raccoon, Logan Paul as Grandpa Monster, Nick Cannon as the Bulldog and Mark McGrath as the Orca.